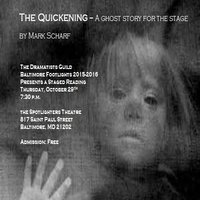 People take great comfort in proof, especially when it comes to the unknown. But sometimes the proof is the explanation. Baltimore-based playwright Mark Scharf debuts his newest work, The Quickening— a ghost story for the stage— as a part of the Baltimore Footlights Reading Series 2015-2016. Hosted by the Dramatists Guild of America, this reading series provides the opportunities for local playwrights to have staged readings of their new works, generating a chance for workshopping new ideas based on feedback given by the audience. The staged reading, Directed by Chelsea Dove, featured a full cast of actors and area Sound Designer Brad Ranno to get things underway. A remarkably chilling tale that begs the question of life after death, Scharf’s newest work stands to bring chills to future audiences should it be produced in its entirety.

Hosted by Fuzz Roark and the Audrey Herman Spotlighters Theatre, various theatrical supporters from across the Baltimore area turned out to support Scharf’s newest work— among them colleagues from various walks of the industry including actors, directors, and other playwrights. The Dramatists Guild of America’s Footlights Reading Series provides a safe and nurturing environment for actively working playwrights to feature their works in hopes of garnering constructive criticism, intelligent insight, and positive feedback regarding what they’ve written. The play, in this case Scharf’s newest The Quickening, received a full reading of both acts with four area actors— Marianne Angelella, Debbie Bennett, Ryan Gunning, and David Shoemaker.

For this particular reading area Sound Designer Brad Ranno was brought on board to the project to enhance the overall experience. Scharf, the recipient of a grant from the Maryland State Arts Council, afforded Ranno’s design work with the intention of more fully exposing the audience to his work’s intention, which is grounded heavily in the unique stage directions and sound cues he has written. Having this crucial design element for a play that is heavily steeped in sensory experience allows the playwright to more readily express the whole concept of the work while allowing the audience to more thoroughly absorb the experience.

Scharf’s newest work settles itself into a lesser practiced genre. When questioned of his purpose for writing the piece Scharf said, “I hope to scare some people, entertain them perhaps. Really anything but bore them. Thou shalt not bore!” If the audience’s response to the work was any indication, Scharf is at the very least living up to the latter part of his work’s intentions. Remarkably gifted with the ability to craft characters and very natural dialogue between them, Scharf creates a compelling and intriguing story which starts its life feeling a bit like a curious, albeit mild, drama but quickly turns dark and foreboding within a series of three perfectly constructed beats just a few pages into the second act.

Being able to hear a work “up on its feet” for the first time is a rare and rewarding experience for both the audience in attendance and the playwright. Actors bring voices with intention to characters that were previously just lines on a page and this critical component to the playwriting process allows for the playwright to hear what’s working, what’s not working, what reads to the audience and what doesn’t. Following the experience with a talk-back session furthers the growth opportunity for new works, ultimately allowing for the playwright to make edits to better the work.

The Quickening received a one-evening special engagement reading on Thursday October 29, 2015 at The Audrey Herman Spotlighters Theatre— 817 St. Paul Street in the Mount Vernon District of Baltimore, MD. The reading is a part of the Dramatist Guild Footlights 2015/2016 Reading Series.

Click here to read the TheatreBloom exclusive interview with Mark Scarf on The Quickening.

Ghost Stories of the Stage: An Interview with Playwright Mark Scharf on his New Work The Quickening

Back to Methuselah at Washington Stage Guild by Amanda Gunther
Close