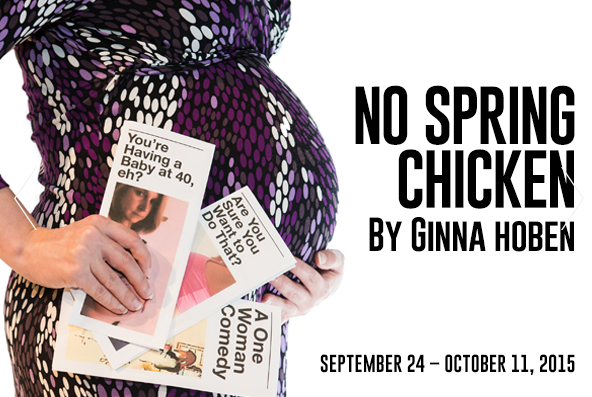 Hope is a powerful thing. It helps you hang onto your dreams, even when you have to hang on for two decades. As a part of the Women’s Voices Theater Festival, NextStop Theatre Company welcomes a bundle of joy in this world premiere production of No Spring Chicken. Written and Performed by Ginna Hoben and Directed by Sullivan Canaday White, this 75-minute one-woman drama is a lighthearted retelling of pregnancy from Advanced Maternal Age. Witty and heartwarming, the tale itself is a beautiful story of simple hope and dreams coming to fruition even at the age of 40.

Creating a simplistic but beautifully symbolic set, Scenic Designer Jane Hosticka Fink captures the essence of Hoben’s tale in her design work. A large and warmly colored crescent is the sole piece of scenery laid at the center of cracked gray tiling. This symbolic capture of fertility illustrates how even in women of an Advanced Maternal Age hope is able to prevail among the barren wasteland that is post-40. The crescent, being a direct image representation of fertility, becomes a uniquely feminine structure upon which a strikingly beautiful moment is played out toward the end of the show, aligning female body with the process that is the miracle of birth.

Lighting Designer Annmarie Castrigno and Sound Designer Nicholas Upchurch work together to create moments of surreal tranquility throughout the performance. These moments occur mostly when the voice of the internet— and occasionally the voice of reason and hope (they appear to be one in the same)— descend upon the otherwise normal retelling of Hoben’s tale. A seren and soothing tinkle of chimes blends with a dotted gobo of paisley patterning across the stage in these moments, sweeping the audience away into this mystical moment of divine and otherworldly advice and intervention. Upchurch’s soundscape on the whole is underutilized, though delightful to the ear.

Making excellent use of the space, Director Sullivan Canaday White keeps Ginna Hoben perpetually in motion. This sits well within the piece’s progressive, albeit somewhat rambling, nature. The show’s overall blocking feels lucid and fluid, as if created in reality and not a vacuum. The overall creative aesthetic of the show warms the audience to the idea of the story as well, with White keeping in mind the overall message of hope in the story as she lays it out on the stage.

Playwright Ginna Hoben takes a bold and welcomed risk in exposing the world to her personal story. The concept and experience is one to be treasured and shared but the current format is muddled and detracts from the overall experience. Caught between working the dialogue over for laughs and milking moments of humor from the audience, Hoben presents a disjointed piece of theatre wherein there is an inconsistency in her method of writing and delivery. There are moments where Hoben attempts to involve the audience but these are half-attempted and fall short of really making that connection. Standing in the middle ground leaves a sense of incompleteness floating in the air. Hoben’s story would be better served by making a decision; either bash unapologetically through the fourth wall and truly engage with the audience throughout, or keep the fourth wall in place and allow the audience to focus and connect with the story being told. The inclusion of the “God-Voice” (appearing as a fortune cookie, the internet, and the voice of hope and reason) is a truly clever device that causes natural humor to occur throughout the performance. These moments where this voiceover occurs arrive in earnest and make the journey interesting. More of these moments and fewer of the semi-interactive moments with the audience would further ground the story in the reality of its truth.

Hoben’s biggest issue as a performer is her inability to connect with the piece. Though the story is autobiographical, in her attempt to distance herself from the powerful emotions and focus on the absurd humor, she disconnects entirely throughout large portions of the performance and the result is a woman, albeit animatedly, reading through someone else’s story. Focusing heavily on where the laughter might fall and how to milk a moment for laughs from the audience, Hoben creates a great many sections of the story that feel contrived and forced.

To her credit, Hoben does have delicate moments of vulnerability and truth peppered throughout the performance. When she approaches a moment with honesty, reflecting on it and delivering it without worrying over whether or not it will land in the audience, the story resonates through clearly with all of its emotional intention and humors intact. While there can be humor in a story of this nature, and there should be to help create levity in the face of serious fear and sorrow, forcing it does no justice to the story or the storyteller. One of Hoben’s most beautiful moments is her ultimate confession of fear near the end of the show. This singular utterance while she is standing still is more connected to reality than any other moment experienced in the play. If the play were filled with more of these moments, where Hoben was able to let go of her comedic act and focus on the rawness and reality of her tale, it would be truly sensational theatre. Hoben is also an exceptionally animated storyteller, so even when the moments feel forced, they are at least exciting.

A solid story, if unevenly delivered, there is entertainment to be had in No Spring Chicken. The important message to receive here is that as a part of the Women’s Voices Theater Festival, female playwrights like Ginna Hoben are being given a chance to put their work on the stage; a remarkable opportunity to have.

No Spring Chicken plays through October 11, 2015 at NextStop Theatre Company— 269 Sunset Park Drive in Herndon, VA. Tickets can be purchased at the door or in advance online.

Review: Catch Me If You Can at NextStop Theatre Company