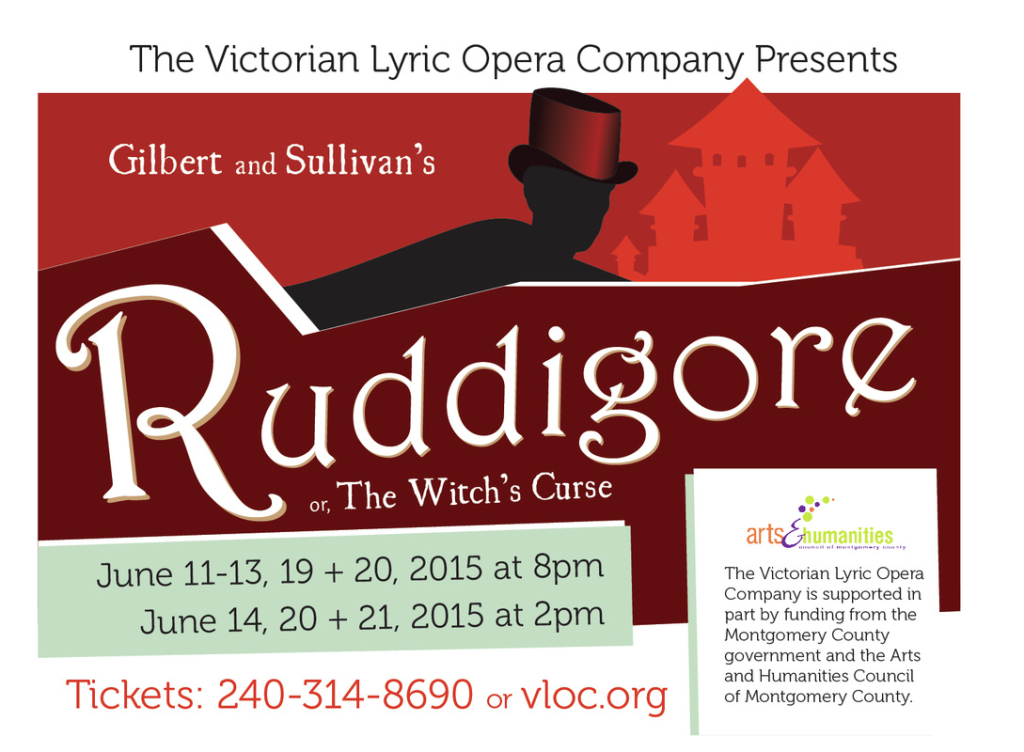 Victorian Lyric Opera Company has found a gem in Ruddigore and they have set it in a jewel-piece of a production. It never received much love during its authors’ lifetimes, but in the adept hands of Director Helen Aberger and her tremendously talented cast, it is an absolute delight today. A lesser produced Gilbert & Sullivan work, whose alternate title is The Witch’s Curse, receives Musical Direction from Joseph Sorge and is well worth seeing this hot and humid summer.

Joseph Sorge expertly conducts a full orchestra. Percussionist George Huttlin in particular stands out, seeming to have several more arms than most musicians. Ruddigore contains some of Arthur Sullivan’s most sophisticated music, and Sorge’s orchestra handles it deftly. And if Gilbert has decided that “do” rhymes with “so” and “no” (apparently without irony)… well, the lyrics are overall quite witty. Especially with the occasional update: one of the baron’s “crimes” is to donate paintings to the Corcoran… where they will never be seen again.

The baronets of Ruddigore have been cursed by witches to commit a crime every single day. But one future baron has avoided this fate: Ruthven Murgatroyd (pronounced “Riven”) has snuck away under the identity of Robin Oakapple (Joshua Hughes, a lush, rich baritone). Oakapple falls in love with Rose Maybud (Keely Borland), in the instantaneous way lovers always do in such love stories. Ruddigore is meant to be a parody of English Victorian melodrama, but the conceits are still entirely familiar even though the genre has long since vanished.

Borland imbues Maybud with both her magnificent, expressive soprano sound and her rubber-faced comic naïveté. Of course Maybud lives in the only town in England populated primarily by a collection of full-time professional bridesmaids desperate to find somebody to marry off. The bridesmaids, led by Kris Devine as Zorah, and Margot Perry as Ruth, made me fall in love with the show from its first moments. They bring life and spirit with them everywhere they go. They are the type of people who fling rose petals everywhere… which is, in fact, precisely what they do. The women’s chorus is a diverse bunch, and their voices blend perfectly in pitch and diction; a testament to Musical Director Joseph Sorge’s abilities. They light up the stage (figuratively) every time they enter. The stage is also lit literally by A. Dawson Smith, who complements the female chorus’ bright, sunny disposition with a bright, sunny back light.

Borland’s charm makes Maybud’s flightiness engaging. For although Maybud loves Oakapple, and he her, each is too nervous to admit it. So when Oakapple sends his sailor friend Richard Dauntless (Joseph Wilson) to woo her on his behalf, she is too polite to refuse Dauntless himself. (See, it’s what the etiquette book tells her, and it is a Gilbert & Sullivan play, after all). The three lovers’ voices blend perfectly in their love triangle song.

Dauntless is left out, but he has a plan. He reveals Oakapple’s true identity, who is now bound to take over the baronetcy and the life of enforced crime. That frees up his brother Despard (Michael Beder), who had given up his love for Margaret (Amanda Jones). Mitchell has a lovely mezzo voice and brilliant comic timing. They can resume their relationship… though she’s still got a touch of wild spirit still left in her.

The simple seaside set of the first act gives way to an elaborate Castle Ruddigore in Act II, the creation of Set Designer Bill Pressly, and is moodily lit by Smith. Oakapple is now beset by the elaborately costumed ghosts of his ancestors, Chief among them is Sir Roderic Murgatroyd (Tom Goode), who wittily badgers the new baronet. Due credit belongs to Jesse Shipley as the show’s Costume Designer for such involved outfits across the board. In addition to their costumed look, the ghosts have been made quite ghastly by Makeup Designer Renée Silverstone, who has also done wonderful work establishing period hairstyles for all of the many, many ladies. Hughes himself has taken on a more dastardly look, capering about in a, uh, cape, because that’s what dastardly villains do. His servant Adam Goodheart (the rich bass of Joshua Milton) has renamed himself Gideon Crawle… because that’s what villains do.

The highlight of every Gilbert and Sullivan play is its patter song, and Ruddigore‘s “My Eyes are Fully Open” is highly reminiscent of the song featured in Pirates of Penzance (owing perhaps to the fact that they are the same song only with slightly different pronouns among the lyrics.) Ruddigore follows suit, giving it to three singers (Hughes, Mitchell, and Beder), first serially and then together. It’s the show-stopping number of the piece, and well worth its intricate encore.

As slender and ridiculous as the plot is, it’s actually got quite a few interesting thoughts on the nature of evil, while remaining resolutely good-hearted and upbeat. It ends with a most ingenious paradox, abrupt and cheerful. The run is only two weeks, so you should go out right now and see this show. You may not get a chance to see this treasure soon. Tickets are very reasonably priced for a full-scale, full-cast production in the luxurious setting of the F. Scott Fitzgerald Theater in Rockville. Ruddigore is a witty, charming, hilarious evening, not just for fans of Gilbert and Sullivan but for anybody willing to be delighted by musical theater. This play and this production should not be missed.

Ruddigore plays through June 21, 2015 at Victorian Lyric Opera Company at The F. Scott Fitzgerald Theatre in Rockville Civic Center Park— 603 Edmonston Drive in Rockville, MD. For tickets call the box office at (240) 314-8690 or purchase them online.

One thought on “Review: Ruddigore at Victorian Lyric Opera Company”