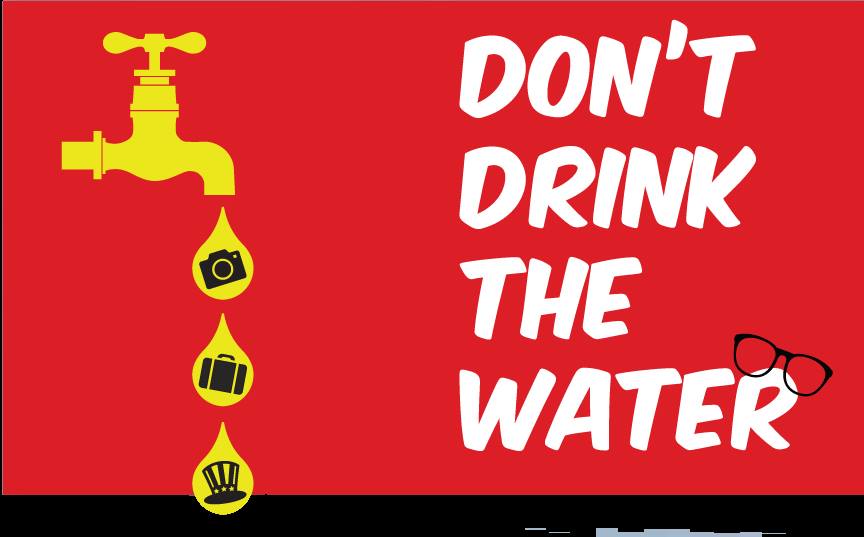 Espionage. Romance. Communists. Tourists. A magic priest living in the attic of the US embassy. Don’t Drink the Water has it all this summer as Cockpit in Court‘s first production of their 2015 season upstairs in their cabaret. A Woody Allen comedy, the play is Directed by Albert J. Boeren and is an honest hysterical hoot that keeps the audience laughing all through the chaos and calamity of an innocent summer vacation gone wrong in 1967. In Russia. Behind the Iron Curtain.

The interior may not look like much, given the cross-x “in-the-round” nature of the cabaret space, but Set Designer Michael Rasinski furnishes the set with an authentic 1967 patriotic atmosphere; a critical component of the US embassy during Cold War Russia. The picture of a proud and austere looking President Lyndon B. Johnson is mounted on the wall and the furnishings are sparse but not uninviting. Rasinski doubles as the show’s Lighting Designer and when the lights go out, he creates a curious blue interior glow that reflects the rioting on the street quite thoroughly.

Costume Coordinator Eva Grove has a knowledgeable understanding of the mid 1960’s. Susan Hollander is the epitome of a sunny 60’s child; a true visual representation of a flower child in her multi-colored flowing pants suits and psychedelic party dresses. Her father Walter is the dictionary’s definition of tacky American tourist in his outlandish Hawaiian shirts and Birkenstocks with socks. Grove even ensures that the jewel tones of the Middle Eastern culture are well represented when the Sultan of Bashir’s first wife arrives to the party in her fully wrapped and veiled burka.

Director Albert J. Boeren, who makes a cameo appearance in the production as the stalwart and agitated Ambassador Magee, traverses the peculiar humors of Woody Allen’s comedy with directorial ease. The dated material of the play and Allen’s strange jokes run the risk of not reading cleanly to the audience, but Boeren maximizes the humor in the show by grounding the actors in the truth of their situation and the reality of the character’s nuances. The pacing moves along at a gallop, keeping things exciting and fresh; a thoroughly enjoyable show filled to the brim with laughter for everyone.

In addition to Directing the show, Boeren serves as the show’s Sound Designer, and while there is precious little by way of sound effects in the production (an explosion or two and a gunshot not withstanding) it’s the scene-change music that is fitted to perfection that makes Boeren’s genius, and particularly hilarious sense of humor shine through. Immeditely following the expository scene— wherein the audience learns of the extenuating circumstances under which they will remain trapped at the embassy while their son at home awaits his retrieval from summer camp— Boeren entreats the audience to Allen Sherman’s “Hello Muddah, Hello Faddah.” Other spirits of musical genius include “Do You Believe in Magic” following scene two— where Fr. Drobney attempts his magic act— “Ahab the Arab” before the fourth scene— which preempts the arrival of the Sultan of Bashir— and the music before the final scene in Act I— which sets up the romantic entanglement of the plot— a snippet of Andy Williams’ “Music to Watch Girls By.” There are even more perfect examples in the second act, but there should be some element of surprise left to this madcap sound adventure.

Accents across the board are situated heavily in the heart of the motherland, thick but discernible, particularly when Chef (Jennifer Skarzinski) or Fr, Drobney (Tim Evans) take to talking. Skarzinski appears as briefly as Boeren does, but her cameo appearances are comic gold as she loses her temper over dinner and becomes a bombastic mess in the face of the irritable Walter Hollander. Evans, who serves a bit as a guiding narrative force for the audience, has a much more demure approach to his Russian, but it is the most accurate sounding in the production. But its more than the accent that makes Evans’ performance worth noting. There is a congenial simplicity about his portrayal making his magic show and giddy excitement over having new guests at the embassy an earnest delight.

Kilroy (Emily Wessellhoff) is a stuffy pill, as it were. Wessellhoff plays the business-like spinster character with a surly demeanor and her constant condescension toward Axel Magee is particularly hard to swallow as he is a rather likeable character. Watch out for her looping lunacy after she takes a brick to the head in the middle of the play as it is most definitely one of the highlights of her performance.

Krojack (John Rowe) has a thick Russian accent that is as good as Tim Evans’ Fr. Drobney. Rowe has a stilted aged movement about his cantankerous old character, marching about like a militant authority figure for the Russian army. His bursts of over-excitability are wildly entertaining, particularly when they burst in the face of Walter.

As for the Hollander family, while Susan (Morgan Wenerick) may be quite mellow and truly a testament to a child of her era, and her mother Marion (Regina Rose) is a worrisome, albeit humorous, Jersey house wife, it’s the patriarch Walter (Chip Meister) who takes the cake (and everything else in the kitchen) when it comes to comic cads. Both Wenerick and Rose deliver pleasing performances, Wenerick having adorably flirtatious, albeit demure, chemistry with Axel all throughout the play. Rose should be noted for her vivid facial expressions and a particularly comedic moment that involves her character thrashing about on the floor with Fr. Dobney and a straight jacket.

Meister is a bombastic, spastic, loud, obnoxious, opinionated, mouthpiece that reflects every negative trait and stereotype of an American tourist as seen through foreign eyes. With a blazing energy that often looks like it will make his head explode, Meister holds his own as the situation and circumstances grow zanier and zanier. With a thick and easily recognized Jersey accent, Meister clues the audience in early on that he and his family are from the armpit of America long before its ever mentioned. Despite all of his blasting, Meister gives the character depth and dimension—a truly remarkable thing to provide a character that easily tows the line of being static in all its angry lather.

As for Axel (Will Poxon) there is a conviviality to his sheer stupidity that makes him an adorable, albeit moronic, character that you simply can’t help but love. With a spirited and pleasant absent-mindedness, Poxon really grounds the character in the complexities of the time and of his duty to his father and his country. His interactions with Wenerick’s character are priceless; the pair delivering the sweetest and most awkward moments of the play. His overall portrayal carries the hysterics, the hilarity, and the emotional honesty required in this play to make it read as humorous with earnest truth behind it.

Don’t Drink the Water plays through June 28, 2015 at Cockpit in Court— in the upstairs cabaret space of the Theatre Building of the Community of College of Baltimore County Essex Campus located at 7201 Rossville Boulevard, in Rosedale, MD. For tickets please call the box office at (443) 840-2787 or purchase them online.

Review: The Gazebo at Cockpit in Court

Review: Towards Zero at Cockpit in Court

Arsenic and Old Lace at Cockpit in Court
Close