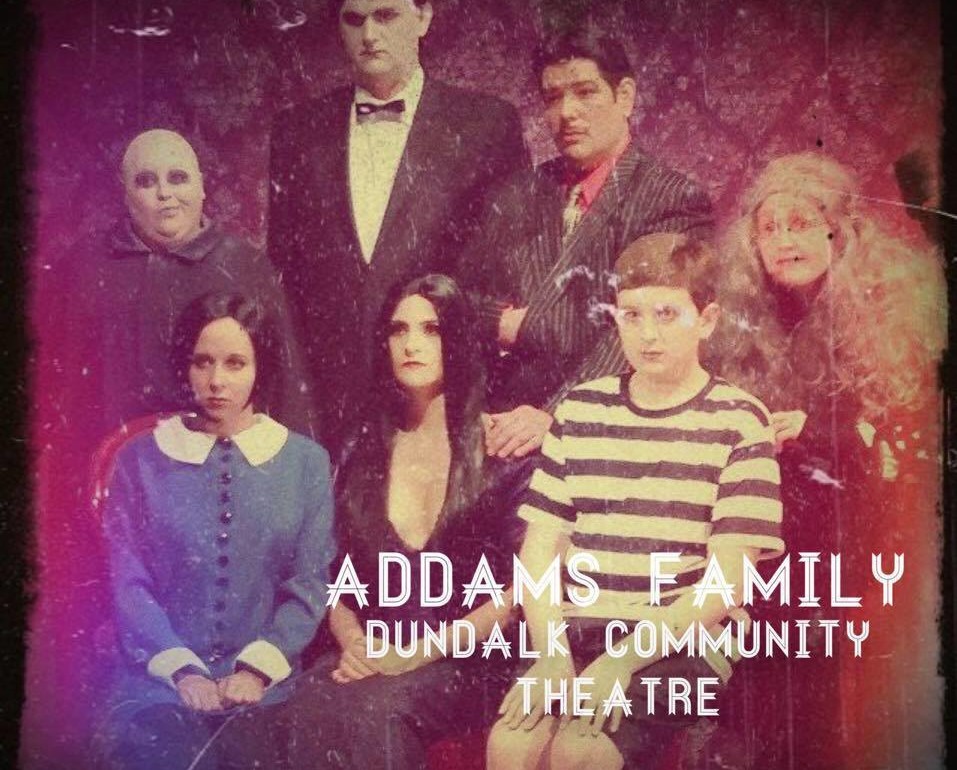 They’re creepy and they’re kooky! Mysterious and ookey! They’re all together spooky— and now they’re rising up from the dead over at Dundalk Community Theatre. Closing out the 2014-2015 season, DCT presents The Addams Family. All the rage in theatres across the state of Maryland, the black-clad family is putting the fun in dysfunctional as they take to the stage. Iconic characters, memorable musical numbers composed by the infamous Andrew Lippa, and a guest appearance by Thing; the musical comedy has a little something for everyone. Directed by Robert W. Oppel with Musical Direction by Nathan Christopher Scavilla, this production really is a scream.

Scenic Designer Marc W. Smith and Properties Designer Bill Lunner deserve a large deal of the credit where the show’s successes are concerned. The set is simply breathtaking. A gorgeous homage to the original sliding staircases and creaky crypts of the original Broadway and subsequent touring productions, Smith and Lunner create the dreary gloom of the Addams Family atmosphere that is expected from such a musical. Lunner gets two huge thumbs up for his particularly ghoulish beds— the first having matching his and her tombstones in the guest bedroom, and Pugsley’s having a weeping angel cresting the headboard. Smith decorates the set in all the right shades of macabre. The

Scenic Designer Marc W. Smith and Properties Designer Bill Lunner deserve a large deal of the credit where the show’s successes are concerned. The set is simply breathtaking. A gorgeous homage to the original sliding staircases and creaky crypts of the original Broadway and subsequent touring productions, Smith and Lunner create the dreary gloom of the Addams Family atmosphere that is expected from such a musical. Lunner gets two huge thumbs up for his particularly ghoulish beds— the first having matching his and her tombstones in the guest bedroom, and Pugsley’s having a weeping angel cresting the headboard. Smith decorates the set in all the right shades of macabre. The pièce de résistance of Smith’s scenic design is the dual-sweeping staircase, over which hangs family portraits of all the main Addams family members.

Smith also serves as the show’s Lighting Designer. Focusing intently on the strikes of lighting that occur quite often throughout the musical, Smith authenticates these brilliant flashes by synchronizing them impeccably with a clap of thunder or gust of harsh wind. Dimmer lighting is used throughout the performance to train the focus on the bleak darkened side of the Addams Family’s sensibilities, again honing in on the darkness that is an iconic representation of these well-loved characters.

Costume Designer Della Lotman deserves a good deal of praise for hand crafting costumes across many centuries as this show in particular requires a great deal of time periods in the ancestors alone. While the platinum blonde wigs don’t pass for ghostly, the intention is there. The various eras— including 50’s flight attendant, 20’s flapper, ancient days of cavemen and more— are thoroughly represented with intricate detailing to each outfit. Where Lotman falls short is in all the vibrant colors featured within the main Addams household. Although traditionally hints of purple or blue may be seen in Morticia and Wednesday’s outfits respectively, having blatant electric shocks of these colors detracts from their overall “basic black” motif and lessens the shock value of the Beineke family when they arrive in their bright colors.

Musical Director Nathan Christopher Scavilla gets a great group sound from the ensemble. For as impressive as they sound as an ensemble for numbers like “One Normal Night,” and “Full Disclosure,” the orchestra itself is a bit clumsy. Scavilla often gets ahead of the performers as they sing and occasionally falls behind them, which results in a bit of a vocal-musical catastrophe. But these musical pacing issues aside, the songs themselves while being sung sound sturdy and fulfilling. Keep your ears out for Lurch (Mark Lloyd) who may not say much but has one of the more poignant musical numbers somewhere near the end of the piece.

Director Robert W. Oppel has as many brilliant moments as he does blunders with this production. The main detracting issue is his misguided concept and execution of the ancestors throughout the performance. It is clear that Oppel’s intent was to utilize the ancestors as the guiding force of the production; they pull the scenery in and out of place, they hover and watch what happens, particularly when young Wednesday and Lucas are present. Where this notion goes awry is when the ancestors start hamming and mugging their presence in every moment of the scene, poking their heads around from walls and waving like the ghostly phantom corp. of The Rocky Horror Show. This ultimately detracts from whatever is happening in the scene where the focus isn’t meant to be the ancestors.

Oppel’s other major issue is the casting choice of Grandma Addams. Granted there are no 102 year old actors still up and performing these days, but taking a younger woman and putting her into the costume does not Grandma Addams make. The lack of attempt to adjust the voice and physicality of the actress in this case does not serve the comedic intent of the show or the character. There are moments across the board where Oppel could have furthered character development as well. Wednesday Addams is a prime example as she is portrayed as too shy and often cheery, lacking the deadpan that is inherent to her character.

Oppel’s major casting success, however, comes in a risky and unprecedented move of casting a female performer to play Uncle Fester. Area actress Kristen Cooley takes on the role with gusto and pulls off a convincing Fester, really actuating the nuances of the character in the way he is written into the script. Oppel guides Cooley thoroughly so that the epitome of balance between audience interaction and character commitment is clearly present in this portrayal. Oppel also pays a nice tribute to the original Broadway staging of Fester’s solo number “The Moon and Me” successfully achieving the illusion that really wows the audience.

Oppel does have great notions for staging the show as a whole, particularly when it comes to blocking certain scenes. This is especially true of the staging for Gomez’ solo “What If?” Oppel brings both Morticia and Wednesday onto the stage, flanking either side of Gomez to present a very clear visual as he sings about how to choose between his wife and his daughter. Choosing to have both Morticia and Gomez on the stairs toward the end of Wednesday’s “Pulled” number so that they can see their daughter giddy stupid in love is another exceptional directorial choice, fully motivating the scene that follows.

Wednesday Addams (Allison Comotto) is an irrepressible little ball of malice that does have a solid voice. Though it is clear she is more comfortable in the soprano rang than in her belting range, Comotto makes both her interpretation of “Pulled” and her solo lead in “One Normal Night” very memorable. “Crazier Than You” marks a noticeable difference where Comotto fully trusts her belting sound and really lets loose, making her performance a great success.

Pugsley Addams (Jules Einhorn) may have the smallest supporting role in the performance but is by no means the smallest talent on the stage. Einhorn has a sassy sarcasm that really speaks to the Addams Family notion of embracing the inner darkness. His maniacal plotting to undo his sister and her new boyfriend is truly worthy of a Pugsley-Addams style plot and his singing voice is crisp and clear. The funniest moment in the performance comes during his solo, “What If?” where he sings a crystal and pristine ballad with earnest sincerity about how he will never be tortured again if he doesn’t get his sister back and this is exceptionally well received by the audience.

Kristen Cooley adapts a throat full of bumpy gravel to convincingly pass for Uncle Fester. The quirky attitude with which she imbues the character really speaks to the taglines of the television show, creepy and kooky. Cooley, however, brings her own essence to the character, defying the conventions of what is expected and this results in a loveable weirdo who serves as the tether between living family and dead ancestors, between the normal Beinekes and the weirdo Addams Family, and the entire cast and the audience. Her song “The Moon and Me” is too precious for words.

Gomez (Vincent Kirk Musgrave) is a Spanish ham triple dipped and glazed in comic perfection. With a scrumptious accent that is fluid and consistent, Musgrave delivers the epitome of a Raul Julia inspired Gomez. His understanding and delivery of comic timing is impeccable. The hyper flamboyance with which he infuses his portrayal of Gomez works wonders for the comedic nuances of the character. Musgrave has a sturdy voice, pure and simple, and when he remembers his lines while singing the songs are sublime. “Trapped” and “Not Today” are hysterical numbers that really echo the sentiment of his character thoroughly.

The true star of the show, and you’d swear they stole her from Broadway itself, is Morticia Addams (Tatiana Dalton.) With a sultry sashay for a walk, Dalton is black magic and thunder upon the stage. Her stoic macabre nature is impeccable and she iconically represents everything that is Morticia Addams. “Secrets” and “Just Around the Corner” become enormous powerhouse numbers that showcase her strikingly powerful and stunningly impressive voice. Leading nearly every dance number of note in the performance, Dalton shows off her fancy footwork and skills during both aforementioned numbers as well as “Tango De Amor.” A blissful black rose, Dalton is a sparkling plum in this role and really makes the show worth seeing.

The Addams Family plays through May 10, 2015 at Dundalk Community Theatre— College of Baltimore County in Building K, at the John E. Ravekes Theatre – 7200 Sollers Point Road, in Baltimore, MD. For tickets, call the box office at (443) 840-2787, or purchase them online.