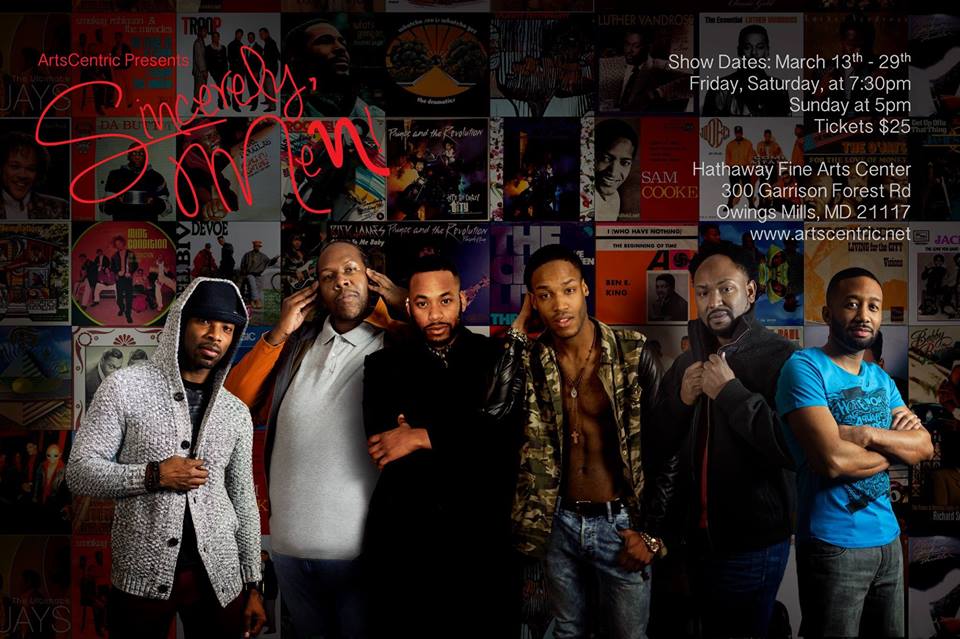 Music is our saving grace; we can save the world through music. Though it’s said that the sequel is never as good as the original, ArtsCentric is defying that logic with their new musical revue Sincerely, Men. Following the smashing success of last summer’s production of Sincerely, Me, the all female version of African-American artists who have had a strong influence in shaping music through the decades, the all male version hits the stage and burns up the house, resulting in a production that is equally as impressive as the first incarnation. Conceived and Directed by Kevin S. McAllister, with Musical Direction by Cedric D. Lyles, this stellar musical showcase features six talented male vocalists highlighting music from the 60’s through the 90’s. It’s a celebration of actual music; soul, rhythm and blues, gospel, funk, pop, and more, a show not to be missed!

The premise of the show is simple in its design: let the music speak for itself. Lighting Designer Lynn Joslin and Projection Designer Stacie Munoz work together to highlight the singing and dancing talent of these six soulful performers as well as the original artists who inspired their performance in this musical revue. Joslin knows how to amp a stage up with pumping lights that fit the rhythm. In the same vein she can quickly cool a number down with a hint of subdued colors or a single spotlight that focuses on a lone performer during a more serious song. It’s Munoz’ projection work that really takes the performance to the next level; a great many pictures of iconic performance legends flashing across the floor of the performance space during various numbers. There are also poignant messages laced into certain numbers, like Sam Cooke’s “A Change is Going to Come” where the current political climate involving civil rights is expressed through striking pictures of hate crime victims like Trayvon Martin.

Of course a musical revue wouldn’t shake the audience so thoroughly and bring their to their feet for a feel-good great time without a little dancing. Choreographer Shalyce Hamby ensures that the rhythm sneaks its way into these boys more up-tempo numbers and really gets things going, particularly for the dance tracks crafted for Bryan Jeffery. Hamby’s enthusiastic dance moves really set the tone for some of the more energetic numbers and reflect her sharp understanding of progressive rhythm through the decades.

Director Kevin S. McAllister has sharp wit and exceptional taste when it comes to arranging the song selections for the production. Interspersing the musical numbers with little comic moments where the men get to tease one another and have a good time being friendly gives the show an authentic feel of chums celebrating music. McAllister breaks the show down into segments. There’s a spot for the oldies, a spot for romance, a spot for standing against adversity— the top of Act II even starts off in church. These clever delineations create an experiential journey for the audience to take along with the performers and it makes the show feel cohesive rather than just songs selected at random.

Musical Director Cedric D. Lyles is proudly wearing the badge of “Chocolate Mozart”, a name tossed at him during the show. Lyles not only leads the show’s orchestra, and creates a professional caliber sound therein, but he sings a fair number of harmonies and a few solo numbers throughout the performance. Charismatic and soulful, Lyles has a mellifluous voice that really rocks out Stevie Wonder’s “Living For the City.” During the top of Act II, Lyles basically becomes ‘Pastor Cedric’ and brings the tempo way down for his segment of “The Blood Will Never Lose its Power,” putting the soulful holler in hallelujah as his vocal strength carries this number to praiseworthy heights. The vocal ferocity that Lyles inspires throughout the church section is more than just a joyful noise; it is elative praise that soars with solidarity right up to the heaven they are singing about; strengthening in quality and power every time the six voices come together for a number in this segment of the show.

The ensemble under Lyles direction moves conscientiously, incorporating Hemby’s dance moves to make music and dance work as one beautiful entity, especially during numbers like “You Are Everything,” a number by The Stylistics. The harmonies they produce, particularly during the mind-melting, heart-erupting, fantastical Act I Finale number “I Who Have Nothing” (featuring Tavonne Hasty, Bryan Jeffrey, and Joseph Eldridge) are sublime and really turn out quality vocal interpretation as well as showmanship to the musical craft.

Each of the performers brings a distinctive personality to the show. Shaun Mykals wraps up the end of the show with some sassy shoulder-jacket slinging action for his interpretation of Rick James’ “Give it to Me Baby.” But there is more to Mykals than good looks and savvy strutting dances moves. His rendition of the gospel song “Total Praise” is a heartfelt spiritual confession; honest prayer in song. Proving his versatility, Mykals becomes sensuality incarnate during “My, My, My” a song popularized by Johnny Gill. His smoky smooth vocals also deliver a delicious rendition of “All I Do is Think of You.”

Jhermaine Drakeford delivers the most haunting solo in the production. His rendition of Sam Cooke’s “A Change is Gonna Come” is a fierce reckoning of spiritually charged emotions that strike the soul with honest power. The rage, the sorrow, the hope, the love; all of the core feelings surge through this number and define his role in this musical revue. Drakeford leads a striking call and answer session during church with “I’m Going On” and really drums up the rhythm of Jesus into this number. And the audience heats right up with his homage to the king of pop music as Drakeford burns out “Wanna Be Startin’ Somethin’” during the party final of the show.

Serving as the show’s opening emcee, Joseph Eldridge is a natural charmer when it comes to addressing the crowds. Revving up his booty-shaking repitoire, Eldridge delivers a memorable performance of “Da’ Butt” near the show’s end. His charming personality radiates through the popular Boyz-II-Men number “I’ll Make Love to You” where he lays on the sensuality thick like frosting. This particular number is a part of the audience participation competition where Eldridge and Tavonne Hasty vi for a young lady’s attention, asking her to choice between musical showmanship or vocal intention. Eldridge delivers smooth honest vocals empowered with heartfelt passion for his number in the unification section, “Love’s in Need of Love Today.”

Hasty, who is noticeably the shortest performer on stage, really shows up and shows out with all of his sketches and bits. Outdone only by Bryan Jeffrey’s comic shenanigans, Hasty owns each number he performs, especially when facing off in the competition-challenge for showmanship and vocal intention. Hasty’s rendition of The O’Jays’ “Stairway to Heaven” has him wailing and baring his soul like Sister Flute in church. And when he gets to the church section of the show, Hasty rocks out a true tent revival with “I’m a Soldier.”

Jeffrey is a hands-down comic ham who steals every moment he can every time he’s on the stage. Whether it’s his feet on fire frantic dancing during the James Brown “I Got the Feelin’” or the sassy shade he throws at his fellow performers throughout, Jeffrey has all the eyes in the audience on him. Cutting loose with his funky bad self throughout the production, it is astonishing to hear the vocal prowess that accompanies “Certainly Lord” during the gospel segment of the program. With an unfathomably high vocal range, Jeffrey brings the house down and steals the audience challenge away from Hasty with his rendition of “The Beautiful Ones.”

Truly an exceptional performance that will have your toes tapping, your hands clapping, and your spirits lifting, Sincerely, Men is celebrating proud kings of music. Baltimore doesn’t need spring when they’ve got an ArtsCentric musical revue to pump up the heat in town!

Sincerely, Me plays through March 29, 2015 at ArtsCentric in The Garland Theatre on the Garrison Forest School Campus— 300 Garrison Ford Road in Owings Mills, MD. For more information or to purchase tickets call the information line at (410) 363-8690 or purchase them online.