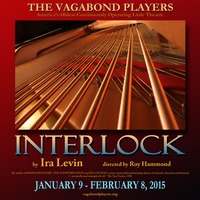 Cinderella’s prince will wake up with soot on his face. Betrayal. Misery. Suspense. The unexpected and yet just desserts served with delicious vindication. An evening at the theatre never brought about such intrigue until The Vagabond Players dusted off a lesser-known Ira Levin work; Interlock. Not the edge-of-your-seat mystery thrillers the playwright often gets recognized for, this classic work simmers with sophistication under the skilled Direction of Roy Hammond. The third installment of the Vags 99th season, this sharp drama is a reminder of a lost genre; a throwback to a time nearly forgotten in the midst of poppy new musicals and edgy political works.

The gorgeous aristocracy of the Widow Price is impressed upon the audience by Hammond’s Scenic Design before the proverbial curtain even rises. A resplendent set the screams decadence and refinement, Hammond outdoes his creative constructive abilities. With a sweeping teal marbled staircase, constructed and designed by Sherrionne Brown, Hammond’s set is the epitome of savoir-vivre and ensconces the notion of Mrs. Price’s wealth and affluence like a living pulse trapped within the walls.

Costume Designer Sarah Kendrick achieves a similar sensation with her design work. The lavish styles that are suited for Mrs. Price are a firm testament to the character’s wealth, albeit at times with a smack of overkill in this direction. Kendrick even upgrades the simple costumes for the house maid and chauffer, ensuring that only the finest threads cover even the servants in the Price household.

Hammond keeps the play from feeling dated and out of time with modernity. His exceptional vision on how to execute a slow-building momentum works superbly within the confines of the script. The tension that is woven throughout the crossing arcs of the main characters sizzles to a finish just as the play reaches its conclusion; not too quickly not too slowly, delivered with impeccable timing. Hammond works the characteristics of the characters fully into play as well, notably Mrs. Price’s paralysis and how that physicality impacts all aspects of her mobility.

Though only appearing briefly in the performance, both Grant Chism and Lisa Walker fulfill their roles as the chauffer and the maid respectively in a manner that befits the time period. Walker does deliver a bit too much modernity, especially when speaking with Hilde, but this is counterbalanced by her sweet innocence displayed with Mrs. Price. On the whole the cast interacts in an exceptionally realistic fashion; creating the world of Levin’s work without question of when and where it is set and the noticeable socio-economical differences among the characters.

Hilde (Karina Ferry) is a formidable character despite her initial naivette and overall enthusiasm for simplistic things. Ferry imbues the character with a true sense of joviality and joy; when her character is enthralled and excited her entire being swims in that jubilation until she’s drenched through and dripping it all across the stage. Ferry’s accent does wander in and out but for the most part is on point with the strong German sound she is meant to deliver. The character shift, which does not arrive until late in the third act, is delivered with such force that it is striking, almost blind-siding, but thoroughly rewarding to witness.

Paul (Rick Lyon-Vaiden) is a vastly complex character. Lyon-Vaiden’s accent is practically flawless and is delivered with all of the subtle nuances of someone who not only understands the language but was born speaking it over English. It’s Lyon-Vaiden’s emotional delivery and overall stage presence that fails to live up to his superior accent. For a character that claims to be full of pride and conviction, he often lacks both of these things in his delivery. The intriguing part of Lyon-Vaiden’s portrayal is his character shift as well, slowly chiseling away at the stoic foreigner he has created until something unexpected emerges. Lyon-Vaiden has exceptional chemistry on the stage both with Ferry and with Laura Gifford, who plays the widowed Mrs. Price, though in very different fashions.

Gifford, as the seemingly harmless widowed woman confined to her wheelchair delivers an enticing performance in this role. With something sinister lurking just beneath the surface of her character’s every move; Gifford’s staunch energy permeates a room even when her character is merely being mentioned. It’s her brash and unapologetic delivery that grips the audiences’ attention and locks them into her character’s plight. A truly engaging performer, Gifford carries the weight of all of Levin’s mysteries in this production squarely upon her shoulders and does not disappoint in doing so.

A true classical treat that is rarely performed; an evening that will stimulate the senses as well as the mind, Interlock, will keep you captivated until the very fitting end of the performance.