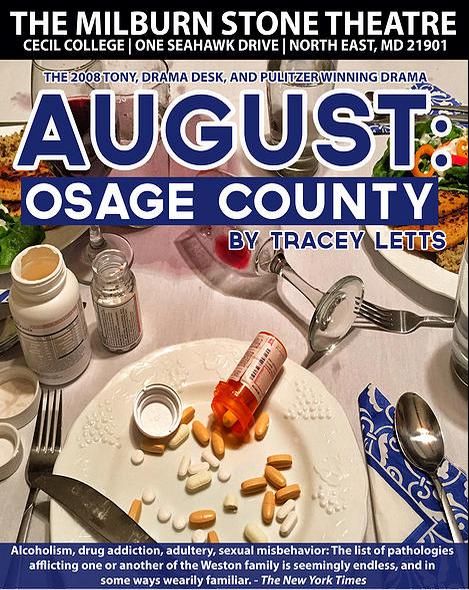 Life is very long. Incidentally Tracey Letts’ work August: Osage County only takes up roughly three hours of said life as it is trafficked across the Milburn Stone Theatre stage this winter season. Directed by S. Lee Lewis, Letts’ compelling familial drama addresses afflictions and ailments to the dysfunctional degree of existence. It’s not a party until something gets spilled and family secrets are spilling out all over the place in this poignant timely production.

The most striking thing about the production is the absolutely gorgeous set designed by Director S. Lee Lewis and Scenic Artist Bob Denton. The enormous Weston household spans three levels with no fewer than six fully formulated visible rooms, two staircases, and corridors and staircases that lead off into the fathomless depths of the home. Denton and Lewis create distinctive coloring options for section of the house; a compartmentalized symbolic representation of the various dysfunctions and secrets revealed and displayed throughout the production. The attention to detail in crafting the set and all its sundries is impressive beyond compare; the rich forest green wall paint in the study to denote the waning poet’s intellectual days, the cheery yellow wall near the piano a mockery of joy that has long since vacated the premises. Layering the set with these echoes of textual symbolism, Denton and Lewis create a subtle extraneous character in the work; the enormous house.

For as perfect as the scenic work in the production is, Lewis falls short with the overall pacing of the production as well as the devices he attempts to utilize for the scene changes. More often than not the dialogue exchanges between characters feels clunky or awkward at best and moves along without fluidity. The scenes that are meant to devolve into utter chaos are fraught with legitimate confusion rather than choreographed calamity. Furthering the pace to a crawl, Lewis infuses songs between the simple scene shifts. Ordinarily this would be welcomed to cover lengthy scenic shifts, however, in this production the songs are allowed to linger long past the actors being set on stage so that their lyrical symbolism can be heard. This not only effects the pacing but is essentially a smack in the face to Letts’ writing as if implying that her emotions, intentions, and symbolisms aren’t crystal clear in the first place.

Despite these setbacks and a terribly uneven performance from Violet Weston (GayLynn Price), the show is brilliantly written and has a great deal of supporting and leading performers that really make the production a worthwhile endeavor. Sheriff Deon (Lance Bankerd) arrives only briefly near the end of Act I and again late in Act II but his moments on stage are delivered with solid charm and a genuine understanding of his role in the bigger picture. Bankerd has a mild accent to the character which helps root the play in “The Plains.”

Cameoesque appearances worthy of note include Steve (Jeff Harrison), Johnna (Colleen Scott) and Little Charlie (Zachary Jackson.) While it can hardly be said that these ensemble performers should be considered cameos as they are all frequently on the stage, it’s their subtle approach to simply existing amid the chaos that makes them stand out, rather than epic speeches or emotional outbursts. Harrison plays a quirky, albeit sleazy, last-minute addition to the Weston family equation. His silliness with Jean makes him all the more noteworthy. Jackson, as the rather wimpy and uninspiring Little Charlie, invites the audience to sympathize over his uncertain plight in an endearing fashion. Scott has a perpetually calming presence about her portrayal, right up until her frying pan scene; a solid representation of her versatility.

The patriarch missing in action, Beverly Weston (Rodney Bonds) gives the audience a solid, albeit meandering, introduction to the performance. It is understandable, as the expository scene is the only scene Bonds’ character appears it, that Bonds wishes to engage every moment of the performance, however his languid pace sets the tone for the remainder of the show and needs to move much more quickly. To Bonds’ credit, his rather off-colored humorous zingers land with perfection when he dishes on his wife and the situation inside the house.

Ivy (Sarah Sickles) is the milder of the three sisters, and at first displays no real distinguishing personality traits. Sickles is meager and quiet in the role, having a true emotional meltdown in her final moments on stage, which are perfected because of her tediously slow build up of discovering her own personality. One of the most genuine moments in the production occurs during the scene in the study at the top of the third act when Sickles’ character makes a startling confession.

Jean (Jenna Glazier) is the epitome of confused and bitter teenager. With a chip on her shoulder, Glazier embodies all of the confusing and mostly angry emotions that a pubescent girl at her age experiences, including the inexplicable need to defy one’s superiors. Her interactions with Steve are ripened with a dubious nature and drive a hard moment into a rich and fulfilling awkwardness. Glazier has perfect facial responses when Charlie (Phil Hansel) ribs her along about ingesting animal fear. Hansel, whose character is the husband to the radiant, albeit opinionated, Mattie Fay, holds his own in severe discourse against his wife, rising triumphant in a particularly sticky argument near the end of his performance.

Shining like a beacon of refreshing light among the stagnant problems of pacing and delivery are performers Janise Whelan as Mattie Fay and Heather Ferral as Karen. It’s difficult to tell who engages the audience more with their radiance. Whether it’s Whelan with her snappy and biting commentary particularly when it comes to Little Charles, or Ferral’s perpetual enthusiasm and zippy accent when she is first introduced at the top of Act II, both of these women reinvigorate the performance zestfully. Whelan delivers a consistently scathing attitude tempered by humorous bouts of sarcasm and Midwestern charm. Her striking emotional change late in Act III is a powerhouse explosion of versatility. The same can be said for Ferral’s performance occurring in the middle of the same act; switching from obnoxiously effervescent to jittery and nerves delivered with wavering conviction, her portrayal is as dynamic as it is humorous.

Bill (Dane Hutchinson) and Barb (Jessica Brockmeyer) drive an exceptional amount of tension and a great deal of the familial strain this production has to offer. Hutchinson and Brockmeyer work exceptionally hard to make their fallout convincible and once it is unearthed the façade crumbles to reveal their true dysfunctions. The tempestuous chemistry the pair shares during the couch-bed argument in the first act (a brilliant natural example of Lewis’ blocking as the pop up and down in perfect rhythm of their argument) is undeniably strong and visceral. Hutchinson maintains his calm in a great many places where Brockmeyer’s character cannot; the result of which is high entertainment even when it gets ugly.

As for Brockmeyer, she delivers an exceptionally well polished performance, carrying a great deal of the show’s dramatic tension on her shoulders. Her spastic moments are delivered with prick-sharp points and the drastic shift her character undergoes as it transforms is harrowing to behold. A remarkable effort put forth to uphold both ends of the upheaval in the household, Brockmeyer’s performance is well worthy of applause.

It may not quite put the fun in dysfunction but the solid performances given are well worth supporting when it comes to this production.

August: Osage County plays through February 1, 2015 at The Milburn Stone Theatre— 1 Seahawk Drive in North East, MD. For tickets call the box office at 410-287-1037 or purchase them online.