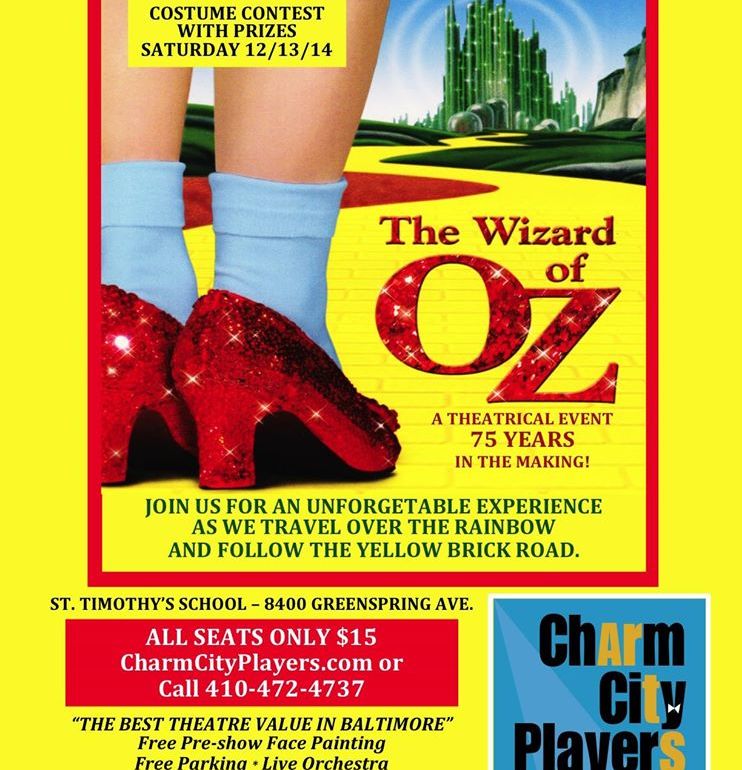 Scenic Artists Katrina Haiber, Michael Kellam Jr., and Annemarie Pallanck create simple set designs for the often elaborately conceived notion of Kansas and Oz. The important factor to note is the contrast between the drab and dreary farm scenery in the opening act and the brilliant colors that wend their way into the scenes on the other side of the rainbow. Haiber, Kellam Jr., and Pallanck create quaint and beautiful little set pieces to illustrate the wondrous city of Oz and all of Dorothy’s adventures that lead her there.

Costumes— composed by a team of over two dozen imaginative creators— reflect the iconic imagery of the time-loved classic film. The munchkins in particular possess a great deal of spirited color in their outfits. Girl munchkins don brightly colored bonnets and mismatched aprons while boy munchkins wear colorful striped stockings; a marvel of the rainbow all across Munchkinland.

The show’s biggest flaw, which can easily be worked out as time progresses, is the pacing and overall momentum of the performance. Often the scene changes take too long with not enough interlude music to cover them. Sometimes less can be more, rather than drag an enormous crystal ball on stage for the brief scene the witch uses it, allow the audience to use their imagination so that the pacing of the show isn’t sacrificed for the option of visual aids or spectacle. While the interactions between the characters clip along and the songs move relatively evenly it’s the space that falls between that ultimately stifles the production’s speed.

Choreographer Jason M. Kimmel brings a great deal of potential to the performance. There is a tap routine featured during “Merry Old Land of Oz” that is stellar. More of this full-tap routine and less of the random non-tap dancers wafting through the number would make the entire number vastly more impressive than it currently sits. Kimmel’s use of the movie’s fancy-footwork during “We’re Off to See the Wizard” is a touching homage to the original performers. Kimmel should be commended for his simple but enchanting routines used during “Ding Dong the Witch is Dead!” and his ability to coordinate over two dozen munchkins into such a clean dance number is impressive.

Stand-out performances among the munchkin ensemble include Grace Volpe as the Munchkin Coroner and Annemarie Pallanck as Munchkin Mayor. Both Pallanck and Volpe get fleeting one-lined solos in “Ding Dong the Witch is Dead!” but make the most of them, and their comical voices enhance their character portrayals.

On the whole the principle performances are solid, albeit carbon copied from the movie. For this particular show, however, mimicry is not necessarily a bad thing. Theatergoers often come expecting the classics with which they are familiar and to have a Dorothy who sounds just like Judy Garland from the movie is comforting and pleasing to them. Dorothy (Brielle Herlein) is an iconic representation of her movie-self come to life on the Charm City Players’ stage. Herlein has a dulcet voice and delivers “Over the Rainbow” with all of the endearing charm that Garland did so long ago. Her speech patterns imitate the style of the character flawlessly and she provides wonderful harmonies when singing with her tagalong gang of foundlings on her adventures through Oz.

Tinman (Scott Herlein) and Scarecrow (Jason Eisner) and Lion (Michael Zellhofer) oh my! The three misfit tagalongs who start the show as Hickory, Hunk, and Zeke respectively, are suited for the characters that they play. Though none are without flaw, each has strength in various aspects of their performance that makes for a terrific trio of performers in this show. Herlein masters the physicality of the rust-stilted Tin Man. Eisner has an exceptional voice for singing “If I Only had a Brain,” and Zellhofer does a fine job of blending comedy and cowardice into his spoken delivery of the Cowardly Lion.

Glinda (Christina Napp) sparkles with radiance in one of the finest costumes featured in the show. Looking every bit like a good witch in her glittery cupcake finery, Napp delivers a channeled tribute to Billie Burke with her rendition of “Come Out, Come Out, Wherever You Are.” She wafts in and out of the scene and mercilessly teases the Wicked Witch (Amanda Lee Magoffin) when they first encounter one another. Magoffin, who is a fine pinched and bitter Miss Gulch, cackles cruelly and delivers a solid performance opposite Napp.

The path to Oz is yellow and bricked and leads audiences through the wintery month of December and right into the new year, but the performances are limited so follow it down before all the grains in the hourglass slip away and you miss this emerging company’s work that is full of room to grow into something wonderful.

The Wizard of Oz plays through January 11, 2015 at Charm City Players in the Hannah More Arts Center on the campus of St. Timothy’s School— 8400 Greenspring Avenue in Stevenson, MD. Tickets are available for purchase at the door or in advance online.