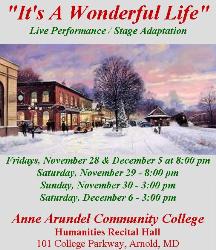 Every time a bell rings an angels gets his wings; so listen closely to see if you can hear the bells ringing at the Pasadena Theatre Company presents the non-musical version of the Frank Capra film It’s A Wonderful Life. Directed by Chuck Dick and Sharon Steele, this timeless holiday classic will warm the cockles of your heart as it reminds audiences everywhere of the simplest of joys at the holidays— family and friends. In true community theatre style, actors of all ages and experience levels populate the stage for the performance and remind us all that love and friendship is all that is truly needed to get by in life.

The lovely scenery of Bedford Falls lands on the shoulders of a team of designers led by Director Chuck Dick, including Keith Norris and Al Caldwell. At times the grandeur of the set complicates the momentum of the show. The scene changes that become necessary because of all these lovely set decorations impede the performance’s natural flow. Dick and the set design crew do a lovely job, especially inside the Bailey household of bringing the holidays into every inch of space, despite the scenic delays during the shifts.

Becky Kopp and Irene Geyer take charge of costuming the largely populated town of Bedford Falls and manage to keep everyone within looking very sharp for the time. The outfits saved for the four Bailey children look especially nice and really help remind the audience that this story takes place in a time not so long ago. Kopp and Geyer save a series of lavish dresses for Violet Peterson as well, including a saucy velvety number for when Bedford Falls gets turned upside-down into Pottersville.

Making himself known is Mr. Martini (Frank Antonio.) Going to great length to prove that there are no small roles, Antonio becomes a brilliant burst of comic relief at times and even wrangles the show back on track with skilled and seasoned improvisational skills. Antonio delivers an authentic Italian accent and his a rich robust stage presence even in this cameo role.

The adaptation presented here is a curious amalgamation that blends the movie with the story in unexpected and familiar ways simultaneously. Having no official Pa Bailey character leaves the notion of the Building and Loan on the shoulders of Uncle Billy (Tom Delaney) and Aunt Tilly (Joan Ashwell.) Both Ashwell and Delaney add levels of humor to the performance that are warmly welcomed. Delaney in particular gives a rather dynamic performance starting off as a silly sop of a character and frantically devolving into sheer panic when things go awry; the nerves that shake through his overall physicality grounded thoroughly in the reality of terror at the surmounting situations.

George Bailey (Paul Ballard) is the story’s true focus. Guided to the light by his wingless guardian angel Clarence (Keith Norris), Ballard’s presentation of the iconic George Bailey is well grounded. Each line delivered as if he’d delivered them a thousand times before, well seasoned, well practiced. His deeply moving moments of raw emotional connection— at the bridge begging for guidance— and at the end of the production welcoming back Harry (Tom Jackson)— ring soundly through his overall performance.

Giving an equally stunning performance as the truly pinched spirit of anti-Christmas is Director Chuck Dick as Henry F. Potter. Truly portraying the essence of the warped, twisted, and frustrated old man, Dick understands the subtle nuances of how to burn out every trace of humanity within the treacherous antagonist. His grumbling bellowing voice is perfect for the character and his line delivery is the epitome of frosty and makes your skin crawl. Truly giving Paul Ballard a run for his money in this production, Chuck Dick takes him on and doesn’t miss a trick as the show goes.

Come and support the theatre family that is Pasadena Theatre Company as they welcome this Christmas classic to their stage this holiday season.

It’s A Wonderful Life plays through December 6, 2014 at Pasadena Theatre Company in the Humanities Recital Hall of Anne Arundel Community College— 101 College Parkway in Arnold, MD. Tickets are available for purchase at the door or in advance online. Please call (410) 440-8460 to check the status of ticket sales and availability.