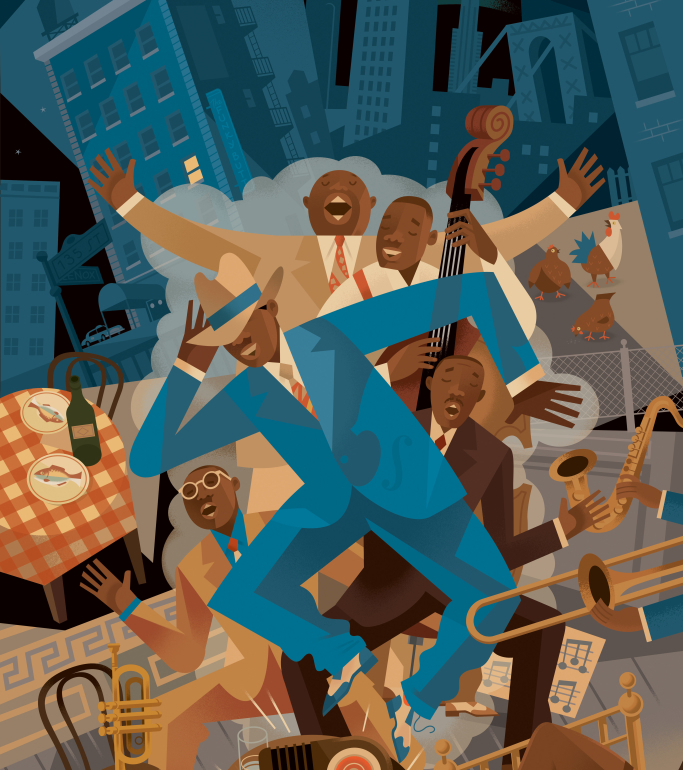 You can’t eat away the blues. You can’t wish away the blues, heck most of us can’t even sing away the blues. But Arena Stage, in a co-production with Cleveland Play House is going to blow away the blues with their production of Clarke Peter’s Five Guys Named Moe. Directed by Robert O’Hara with Musical Direction by Darryl G. Ivey, this bouncy musical zinger features the greatest hits of Louis Jordan. Light and entertaining this upbeat, up-tempo underdog show is a perfectly non-traditional musical for this time of year.

For the energetic musical numbers a 50’s style light show feels not only appropriate but necessary. Lighting Designer Alex Jainchill brings all the spectacle such a show requires with blink-lit steps and full color floods in every popping color of the Technicolor rainbow. From striking white flashes in the main banner sign that reads “MOE” to the individual lights on the front of each descending step— all of which change colors— Jainchill infuses the peppy performance with pops of lighting wonder.

This clever light work goes hand in hand with the fantasy-themed set created by Set Designer Clint Ramos. Appearing from out of the radio, Ramos’ R&B concert-style steps complete with dance platform over the orchestra adds an extra clip of zing to the show. Rounding out the show’s energy in the design department is Projection Designer Jeff Sugg whose projections are the accents to Jainchill’s lighting that give context to the setting as a whole.

The costumes pop against the lights as one might expect they ought to in such a groovy piece of musical theatre. Costume Designer Dede Ayite creates suave and dapper suits of glittering color for the five Moe characters, each with a color to suit their personality. Ayite switches to sharp and stark white suits for the second act, switching up the tone of the show as well as adding a little variety to the Moe characters and their personalities.

Director Robert O’Hara, with Musical Director Darryl G. Ivey, creates a unique musical experience having the orchestra live on stage. The more lively numbers feel that much more exciting having the full band just under the main platform in the direct sightline of the audience. Ivey keeps the orchestrations flowing even when the songs are slower and more subdued in their tempos. O’Hara has a similar approach to the momentum of the production though the beginning of the show after the initial arrival of the five guys named Moe feels a bit sluggish and takes time to rebuild that burst of energy that welcomes them to the stage. This decline in momentum is more Clarke Peters’ writing and arranging and less to do with O’Hara’s direction but a similar after-drop phenomenon occurs again in the second act. These awkwardly paced moments aside, the show maintains a consistent rhythm that keeps the audience involved right up through the participatory Congo at the end of Act I.

Choreographer Byron Easley showcases a variety of fancy footwork throughout the performance but after a while the routines become monotonous. There are only so many pelvic-pops, hip-swivels, and knee-twists that can be jumbled into a dance number before they all start to look the same. While most of the Choreography is tight throughout the show, it feels underutilized, particularly during the tap routines where only three of the five Moe characters take to tapping up a storm for the audience’s enjoyment. More of Easley’s acrobatically influenced choreography— which is experienced early on and then never again— would have better served the eager toe-tapping energy of the show.

The five Moe characters harmonized divinely. The title number as well as numbers like “Knock Me a Kiss” and “Saturday Night Fish Fry” feature their voices blending well together and creating tones that really tickle the audiences’ fancies. “The Final Medley” is a striking finale number that showcases the versatility of the group as a whole. They support each other throughout the songs and sound enthusiastic as a quintet.

Little Moe (Clinton Roane) may have the diminutive label, but his moxie proves to be anything but small. With genuine gusto he pitches “”I Like ‘Em Fat Like That!” to the audience, really rolling his charisma through his swiveling hips and popping pelvis. Though not a vocal powerhouse, what he lacks in strength he makes up for in character. Roane produces a crystal clear sound filled with rhythm and lively soul for “Choo Choo Ch’Boogie,” and gives an all round solid performance.

No Moe (Jobari Parker-Namdar) delivers swanky suave charm throughout the performance, getting that sophisticated style on for his rendition of “Messy Bessy.”  As a soulful serf of song, Parker-Namdar lets the good times roll right through his vocal pipes for “Reet, Petite, and Gone,” which serves as the tail end of The Cabaret sequence during the scene at The Funky Butt Club. Leading the top vocals for “Ain’t Nobody Here but us Chickens,” he sets up comic gold for Four-Eyed Moe (Travis Porchia.)

With his ever-present sunglasses even indoors, Porchia delivers comic panache in the aforementioned number. Squawking and squeaking in an insanely humorous falsetto, he delivers his best chicken impersonation complete with fowl dance moves, giving the audience a solid reason to hoot and holler. “Azure-Te” shows a completely different and deeply soulful side of his vocal prowess.

Eat Moe (Paris Nix) delivers provocative sensuality for “Knock Me a Kiss” and does a series of body moves launched with a split that send shivers up the spine. Nix delivers full-tilt sassiness for his verse of “Safe, Sane, and Single” and switches up his performance game entirely for “Don’t Let the Sun Catch You Crying,” a haunting and moving baritone range that resonates with the bluesy soul of jazz through the entire song.

Big Moe (Sheldon Henry) has big shoes to fill and for the most part delivers. Unable to warm the audience at the beginning of the show with “Brother Beware” which feels unfortunately flat, Henry livens up and gets the entire audience shouting along for his boisterous rendition of “Caldonia.” With a blast of energetic pizzazz this number becomes one of the most fun to engage in and is thoroughly enjoyable. His sobering voice with deep rhythmic sway for “What’s the Use of Getting Sober” tugs firmly at the heartstrings. Henry understands the rhythm of blues and emotes it with vulnerability.

Truly the talk of rhythm town, Kevin McAllister as Nomax is the show’s shining light. Between his impeccably developed character and his phenomenal vocal ability, McAllister is the piercing beam of radiance in the production. The smoky jazz-riddled sound that exudes from him in “Early in the Morning” is sublime. His vocal sustains at the end of that and other numbers are astounding; powerful and provocative. The honest blues sound that floats from his voice at the end of “I Know What I’ve Got” is stunning; the pure emotion that resonates throughout this and every number he sings serving as a vocal gift to the performance as a whole.

Moe— all five of them— have  great number of gigs to get to and won’t be around forever. A chance to miss lighthearted entertainment would surely give any theatergoer the blues, so be sure not to miss these Five Guys Named Moe, and their really talented friend Nomax, down at Arena Stage through the end of December.

Five Guys Named Moe plays through December 28, 2014 in the Kreeger Theatre of Arena Stage at The Mead Center for American Theater— 1101 6th Street SW in Washington, DC. For tickets call the box office at (202) 488-3300 or purchase them online.