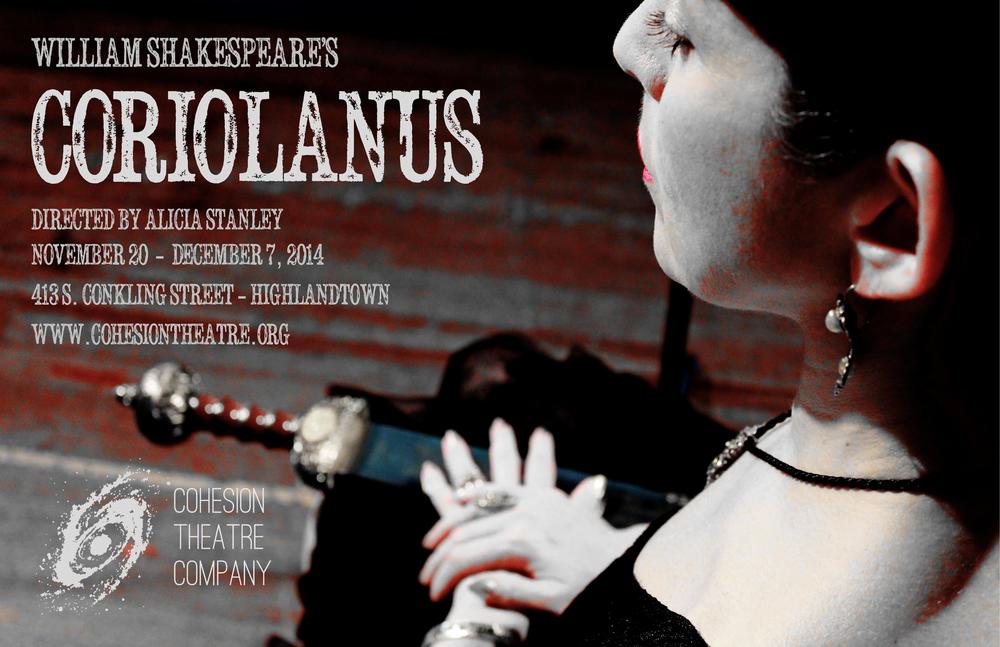 The end of war is uncertain; Cohesion Theatre Company making an impact in the Highlandtown Arts District with their inaugural production Shakespeare’s Coriolanus, is certain. Exploding onto the scene with one of the lesser performed tragedies in the Bard’s repertoire, the new Baltimore-based company settles in with an ambitious first show, delivering on their company’s namesake a hybrid of classic tragedy with modern minimalist influences. Directed by company Co-Founder Alicia Stanley, the production is impressive and fulfilling for a brand new company making waves in Charm City’s largest arts district.

Fusing modern minimalism against Shakespeare’s classics has been a popular trend as of late but Scenic Designer Casey Dutt takes the concept in a new direction with her graffiti walls in the space. Various colors of red and black spray paint adorn the side walls of the theatre space spelling out clever messages in ancient Roman. Dutt constructs an illusion to the gates of Rome out of busted pallet crates at the top of the set and leaves the rest to the actors. It is this explosive juxtaposition of color and words against an otherwise barren setting that draws the intrigue of the audience; attempting to decrypt what’s written before the show and at intermission becomes a source of intellectual amusement.

Costume Designer Heather Johnston takes a similarly deliberate approach to joining classic Roman garb with modern every day clothes. The citizens of Rome don threadbare toga tops of the working class over skinny-legged jeans; a brilliant execution of the company’s namesake threaded into the design work. Those of more noble standing have colored tops; purple for regal sensibilities and green for militaristic honor. Johnston hones in on costume hints rather than whole concepts; subtly generating a notion that the play takes place in ancient Rome rather than forcing the idea down the audience’s throats with full toga gowns and Roman armor.

As one of the bloody tragedies the fight scenes that filter their way into the dialogue-heavy production are striking and crisp. Co-Fight Choreographers Jamie Jager and Kelsey Painter craft realistic street-brawl violence among the actors. The tightest of fights is witnessed between the show’s title character and Aufidius; a sharp showdown of brute strength and cunning, agile steps. That fight sequence alone is the mark of two polished fighting minds hard at work.

Director Alicia Stanley explores the basic notion of Romans at war and the emotional impacts left to those in the wake of destruction. The single-file line marching in and out of the space every time a group arrives suits the piece with a nod to both the time and traditional Shakespearean entrances and exits. Stanley blocks the show in the round with impressive results; the actors feeding to three sides of the audience in a frequent rotating fashion. The performances throughout are wholly inspired with emotional truths and raw emotional extremes.

Kelsey Painter, a player featured throughout in several ensemble roles as well as a named character role, becomes a scene stealer over the course of the production. From her rebellious bordering on spastic fury-laden portrayal as a citizen of Rome leading a protest in the square to her hilariously dim-witted portrayal as a servant in Aufidius’ home in the second act, Painter draws the audience attention with her fully engaging shenanigans, whether they be stone serious like in the first act or bombastically comical as with the second act. Painter also appears as the doting and morose wife to Coriolanus. Her unyielding devotion as well as her perpetually pouting countenance is worthy of note and commendation on top of her other character achievements in this performance.

When they say momma knows best, Volumnia (Nancy Linden) should come to mind. With an eternal ease to her presence, Linden upholds a noble calm within the mother of the tyrannical warrior. She speaks smoothly; every word uttered from some depthless pool of internal tranquility. Powerfully persuasive the perpetual calm ripples in an unsettling fashion when her character becomes incensed; a fascinating and dynamic portrayal of a rather limited character.

Practically mirroring Linden’s portrayal but in masculine form is Sean Coe as Menenius. Serving as the voice of logic and reason, often an emollient to Coriolanus’ fulminant nature. Coe’s performance is grounded in sensibility though that is not to say that he is out of touch with a deeper emotional thread of his character’s existence. The scene at the gates of Aufidius’ home is stunning; a reach into the depths of Coe’s emotional wheelhouse, delivered with a harrowing effect.

As for Coriolanus (Dave LaSalle) and his infinite tension with Aufidius (Matt Ancarrow) the show rides upon it. LaSalle mounts the character with gusto; a strong, albeit monotonous, portrayal of brutish anger. LaSalle does display variety, softer scenes occurring when interacting with his character’s wife and mother, and a strikingly humble scene delivered at the top of the second act outside the gates of Aufidius’ home. It is Ancarrow that carries a great deal of the dramatic tension in their performances. Edgy, vicious, and driven by a palpable bloodlust, Ancarrow’s portrayal of Aufidius is dynamic and compelling. The pacing encounter at the top of the second act is a pivotal point of his performance; the facial expressions speaking where words cannot in a truly inspiring fashion.

The production moves quickly; trimmed to fit the modern audience with a sharp focus on everything that is important in the Bard’s tragic tale. A company well worth investigating as they launch their first season in town.

Coriolanus plays through December 7, 2014 at Cohesion Theatre Company— 413 S. Conkling Street in the Highlandtown Arts District in Baltimore, MD. Tickets are available for purchase at the door or in advance online.

Review: A Little Bit Not Normal at Cohesion Theatre Company