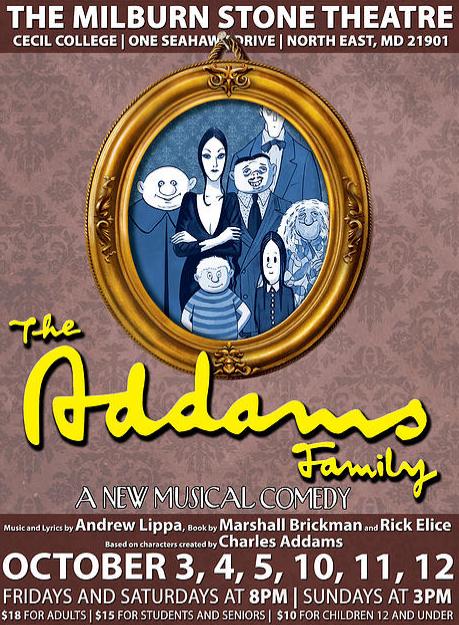 Living. Dead. Or undecided. Family is still family, and when you’re an Addams, you’re obligated to the clan! It’s time to catch a case of the creepies and the kookies up at the Milburn Stone Theatre as they present the North East Maryland premier of The Addams Family the musical. Directed by S. Lee Lewis with Musical Direction by Shane Jensen, this all-too familiar musical with Music and Lyrics by Andrew Lippa and Book by Marshall Brickman and Rick Elice is pleasing audiences up and down the coast. With all the loveable characters from Charles Addams and a brilliant storyline woven in there are a dozen ghoulish reasons to enjoy this family fun musical.

Living up to the expectations of such a grandiose show, Scenic and Lighting Designer Todd Mion creates a thoroughly creepy house that is the perfect dreary abode for the dark-dwelling Addams family. The multi-tiered setting allows for Director S. Lee Lewis to play out “The Moon and Me” in an intriguing and fascinating new fashion, including a parade down the sweeping staircase as Fester sings his professions of love to a celestial body above. Working with Properties Designer Eyvo Johnson, Mion gets all of the disturbing little accessories into the set that makes the house truly unique, including the relic chair from the Spanish Inquisition and a mouse-eating plant.

Pick a shade of black and Costume Designer Marie Bankerd has it featured in this production. For Morticia’s dress cut down to Venezuela, the design is stunning and truly makes the actress look like the iconic character in every way possible. Bankerd also designed wigs and hair in conjunction with Make-Up Artist Ryan DeVoe, creating the perfect blend of dead ancestors and pale family members across the board. The ancestor costumes stand out the most; period pieces across history from caveman right up through the 40’s and 50’s to cover a menagerie of long dead relatives.

While the Choreography in the opening number “When You’re an Addams” is promising, Choreographer Jackie Kappus leaves the show feeling a little lack luster in the dance department. This big opening number is as big as the dance routine really gets leaving holes in songs peppered throughout where Kappus could really infuse the ancestors with routines of their own to enhance moments during the performance. “Secrets”, “The Moon and Me” and “Tango De Amor” all lack the spectacle that larger company dance numbers require, though Uncle Fester does an exceptional job of keeping the focus on him for “The Moon and Me” making the lack of dancing not nearly as obvious.

Comic timing is key in a musical crafted around witty one-liners and zingers that need to land in order for the audience to roll with the punches. Gomez (Ryan DeVoe) while having a crystal clear voice and a strong sense of vocal intonation, does not have this comic panache to deliver a great deal of Gomez’s lines. Many of them are rushed or mumbled and get lost in the scene, the joke along with them. DeVoe does, however, give a very serene and bittersweet of “Happy Sad” which is almost touching enough to forgive his comic mishaps.

The triple crown performers in the production who carry the performance are Wednesday (Lyndie Moe) Uncle Fester (Lance Bankerd) and Morticia (Erika Bankerd.)   Each of these three performers brings exceptional vocals, acting talent, and thorough character development to the stage for these legendary roles; finding unique ways to represent what the audience recognize in their favorite Addams family members while still making the characters their own.

Lyndie Moe is the epitome of a stoic gothic teenager with a deadpan delivery that could strike down a needle in a haystack from 500 miles out. Her crisp delivery combined with her utter aloof portrayal creates the perfect Wednesday Addams character. And her singing is impressive. “Pulled” becomes a series of belts and holds that easily make her one of the most powerful vocalists on the stage. “Crazier Than You” becomes a ferocious duet with Lucas (Codey Odachowski) and “One Normal Night” gives Moe the chance to really grit her gut and bare it all when it comes to handling family dysfunctions.

Erika Bankerd as the deliciously dark Morticia Addams was created for the role. Her statuesque figure, her perfect pauses built into her responses; she has the look, she has the attitude, she has the timing of this character nailed right into the coffin. Bankerd delivers grim with precision and turns the lyrically dissonant number “Just Around the Corner” into a show-stopper with her stunning sound and sharp delivery. Bankerd understands the nuances of the character, modeled from predecessors before her but still uniquely her own; a true testament to bringing new life to an iconic character. “Secrets” proves that it is indeed no secret to just how suited for the role she is.

Stealing the show from the top of his shiny bald head is Lance Bankerd as the ambiguously curious Uncle Fester. With the voice, the look, and even the mannerisms, Bankerd crafts perfection into this comic character. And his tremendous belt in the upper range at the end of “The Moon & Me” is stellar, surprising, and stunning. With a keen understanding of audience interaction, comic timing, and all around good showmanship, Bankerd concocts the perfect Fester for moments where he intercedes  between the plot and theatergoers. His performance will burst into light like the light bulb glowing in his mouth.

Be sure to get your dose of shadows and gloom before this musical creeps back into the darkness for the fall season at The Milburn Stone Theatre.

The Addams Family plays through October 11, 2014 at The Milburn Stone Theatre— 1 Seahawk Drive in North East, MD. For tickets call the box office at 410-287-1037 or purchase them online.