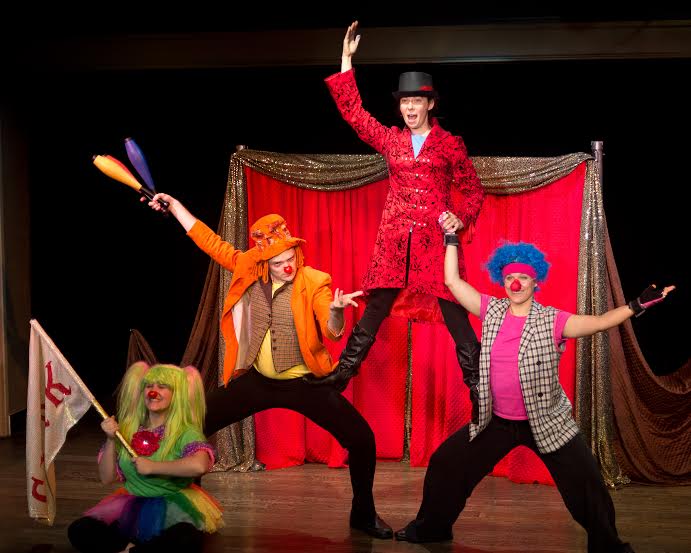 Ladies and gentlemen! Boys and girls! Step right up to see the most amazing show under the big tent that the city of Gaithersburg currently has to offer! The Cyrk Zaba has come to the stage on tour with the InterAct Story Theatre and is here with their brand new production of Not My Monkey. The show, which is written and directed by Ali Oliver-Krueger and the InterAct Story Theatre Ensemble, is an exciting new adventure for children of all ages to learn about responsibility and respect through live theatre and improvisation. The previously touring-based company has settled down for its area debut and is causing quite the stir with this performance, after all, just listen to all those monkeys!

With a fun and educational mission in mind, the company’s production aims to focus children on the three most important things theatre can offer to viewers of any age: entertainment, education, and imagination. A fully interactive experience, the children of the audience are included in the show’s creation just like an improv show only with more guided structure. Members of the performance ensemble engage audience members asking them for suggestions of a town name and things this for which this imaginary town is famous; bundling them all up into the performance. This inclusion of audience ideas and participations is an excellent way to keep children engaged in the performance as they feel like they’ve helped to create the magic they are witnessing.

But InterAct Story’s performance doesn’t stop just at the pre-show involvement! Audience members are engaged throughout the show with cues to make sounds and offer suggestions to keep the show growing. In addition to improvisation skills, the ensemble is teaching good etiquette and respect by having audience members take turns and raise their hands to participate. The show moves along at a pace perfect for children; not too fast but not too slow and includes all sorts of theatrical techniques— including clowning and miming— for a well-rounded exposure.

Director and Playwright Ali Oliver-Krueger wears many different hats for the production, including that of co-Costume Designer alongside Denise Young. Vivacious colors that inspire the atmosphere of a true traveling circus pop up throughout the performance, especially in all of the hilarious clothing afforded to the Cyrk’s clowns. Oliver-Krueger guides the ensemble through the show with the main moral in mind, based on the old polish proverb, “not my circus, not my monkeys, not my problem.” While this is a literal staple in the performance as the circus monkeys run amuck and wreak havoc upon the circus and the town, the underlying message therein is a powerful one; one that Oliver-Krueger ensures is understood by the audience until a solution is reached.

Clowning around is all fun and games, but it is also exceptionally hard work. Clown Choreographer Jack Novak, who performs as a member of the ensemble, makes those moments of mime feel extra real with his skilled expertise. The chaotic scenes, particularly later in the show when the clowns attempt to wrangle up the monkeys, become hilarious moments loaded with physical shtick that are executed with sharp precision and look fantastic.

The performances across the board from all the members of the ensemble, which include Oliver-Krueger and Novak as well as Anna Jackson, Sarah King, and Alani Kravitz, are stellar. The way the ensemble interacts with the children of the audience showcases their true knowledge of how to reach out to young theatergoers and successful engage them. King in particular a the ‘green clown’ gives a great deal of her miming over to the children’s responses; a wonderful thing to encounter in children’s theatre.

The show is brilliant for many reasons, including the lesson it teaches, but mostly because of the multifaceted theatrical experience provided with so many different types of performance craft incorporated for the audience to see. The big top won’t stay pitched for long, so be sure to come out and see what’s happening with all those monkeys at the Cyrk Zaba before it’s too late!

Not My Monkey plays through October 26, 2014 with InterAct Story Theatre at the Gaithersburg Arts Barn Theatre— 311 Kent Square Road in Gaithersburg, MD. For tickets call 301-258-6394 or purchase them online.

Review: The Hero of Everything at InterAct Story Theatre

The Legend of Pufferfish Pat: A Tall Tale For Mad Times at InterAct Story Theatre