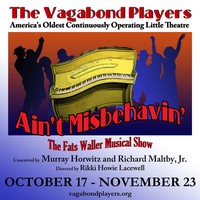 When taking a chance on an evening out at the theatre just what one gets? Well, one never knows, do one? But one will certainly be having a toe-tappin’ foot-stompin’ swingin’ ringin’ good time down at The Vagabond Players as their 99th season continues on with Ain’t Misbehavin’, The Fats Waller Musical Show. Conceived by Murray Horwitz and Richard Maltby Jr. this jazzy swinging sensation of a musical revue hits the stage a stompin’ and has the whole joint jumpin’ before all is said and done. Directed by Rikki Howie Lacewell with Musical Direction by LeVar Betts, this might just be the feel good musical of the fall if ever there was one that felt so lively!

Director Riki Howie Lacewell wears many hats for the production including that of Costume Designer. The outfits are smashing, a perfect fit for the Harlem Renaissance era of the 1930’s. Between the aristocratic frippery featured in the second act once the performers move into ‘the Waldorf’ and the stunning blue dresses that are saved for the finale, Lacewell has an eye for period costumes that suit her performers. The gents look mighty dapper and the ladies look classy, especially once the fancy hats come out to play later in the second act.

Lacewell serves as the production’s co-Scenic Designer as well, working alongside Mark Holt to create a vivid stage that really pops to the eye. Holt and Lacewell create a universe with atmospheric charm; a plethora of scenes all contained within the confines of the wall and floor of the stage. Inside a smoky nightclub or outside on a park bench; all done with vivid paintings and the grand band focused right in the center. A visual symphony to match the energetic mood of the music; the set design becomes an enticing entity that really draws the audience into the time period of the piece.

Musical Director LeVar Betts showcases a tremendous mastery of balance in this production. With the intimacy of the Vagabond Players stage it becomes risky to put an orchestra in plain sight on stage, but Betts’ impressive ability to keep the volume under control is commendable. Never once does the orchestra wash away the soloists. Betts keeps the orchestra sounding as lively and as vibrant as the stage looks while simultaneously being conscientious of sound levels; this in itself is a rare accomplishment. With a true ear for rhythm and feeling, Betts orchestra keeps the show swingin’ along in time so that there’s never a dull moment or a lull, even when the tempo shifts from lively and upbeat to something a little more swanky and subdued.

Director Rikki Howie Lacewell’s vision for the musical is clear: telling the story of music. With tremendous talent at her command, Lacewell’s production is not only thoroughly enjoyable but exciting in all that it represents for the community as a rarely presented musical revue. It’s her ability to craft a scene within the confines of the musical numbers that makes her production stand apart from other musical revues of this nature. The cast under her command is not a group of actors performing a show but a group of friends sharing an experience to which the audience is invited. Chums enjoying a dance routine instead of actors following a choreographed number, and old pals cuttin’ a rug rather than two men trying to be funny’ all of this is achieved because of the environment Lacewell provides as a director.

The talent featured within the cast is sensational; voices blending in perfect harmony for full cast numbers like “Black and Blue” which becomes the most striking moment in the production. The diverse dynamic of style featured in this number alone in comparison to the rest of the number is mesmerizing and the sound achieved when five voices blend as one sends chills down your spine. But it isn’t just the serious numbers where the voices of the cast work as one instrument. Upbeat ensemble numbers like “The Joint is Jumpin’” and “Handful of Keys” are just a few of many examples throughout the performance where the six voices of the cast work in tandem to provide an exceptional musical experience.

Young Charlaine (at this performance Amber Hooper) finds her moments to shine amid the more seasoned ladies of the stage. Hooper takes to the role of the bubbly youth with a vigorous flare, really living up the flashy notion of showboating for “Yacht Club Swing.” For as hilariously obnoxious as that number is, Hooper truly settles into her own for “Keepin’ Out of Mischief Now.” A delicate drop of dulcet delight sweeps her voice along the melody and shows how a simple songbird can truly melt the hearts of the audience in just one number.

Melissa Broy Fortson proves that even those in the ensemble can have their moments and shine. Fortson’s voice blends to brilliance in the group numbers but it’s her cameo spots in silence that really get the audience giggling and enjoying her presence. Working the comic angle, Fortson upstages both leading ladies at the end of “Find Out What They Like,” a hilarious ending to a cute and humorous little number. But her laughable moments are far from over as she quickly reappears as a silent sign-carrying cameo in “Fat and Greasy” practically stealing the number out from under the slippery feet of the gentlemen who sing it. Keep your eyes on Fortson throughout the show for little comic gems that are a scream of delight in this production.

Holding their own against the cameo-stealing ensemble members, Armelia (Michelle Harmon Bruno) and Nell (Brenda D. Parker) keep the entertainment lively. While many of their numbers are featured duets with the gentlemen or as a part of the group ensemble, both Parker and Bruno bring distinctive personalities to the performance that resonate true for many of their musical showstoppers. Bruno finds comedy with a heavy jazzy voice for “When the Nylons Bloom Again” showcasing quite the range while Parker snazzes it up in a similar fashion for “Cash for Your Trash.”

Both women provide sensationally dynamic performances, sliding from numbers like “Off-Time” into more subdued numbers like “Lounging at the Waldorf.” Bruno lays out a fierce blast of adagio style blues in “That Ain’t Right” but brings down her pacing and pulls the low notes right up by their sultry roots in “Squeeze Me.” Parker enchants the audience by gliding soulfully down a run of glissandos in “I’ve Got a Feeling I’m Falling” and packs a powerful emotional punch into “Mean to Me.”

Andre (Timoth David Copney) and Ken (Kevin Sockwell) are the cat’s meow as far as character actors go. Copney and Sockwell play exceptionally well together even in scenes when they aren’t each other’s primary focus. Sockwell’s rendition of “Your Feet’s Too Big” is the primary example of this subtle-scene stealing relationship. While he blasts the audience with this comic number, using his extremely animated facial expressions to keep everyone busting a gut in hysterics, Copney is sitting off to the side doing a pitiful little footsy shuffle that matches the rhythm of the song.

Sockwell’s facial features are to die for in this performance; a true glazed ham screaming out for attention in numbers like “Fat and Greasy” a duet shared with Copney. And for as vivid and engaging as Sockwell’s expressions are, Copney’s body is that much more in motion if not more. “The Viper’s Drag (The Reefer Song)” becomes an experiment in how many seductive directions Copney can unhinge and disjoint his various limbs, while every other number that features him upright on his toes is a veritable smorgasbord of dance candy.  Both Sockwell and Copney have brilliant blasts of sound, enormous vocal strength, and tremendous talent in their singing ranges.

You won’t want to miss your chance to dance along in the aisles at this first of its kind musical revue at the Vagabond Players this fall; they really do keep the joint jumpin’!