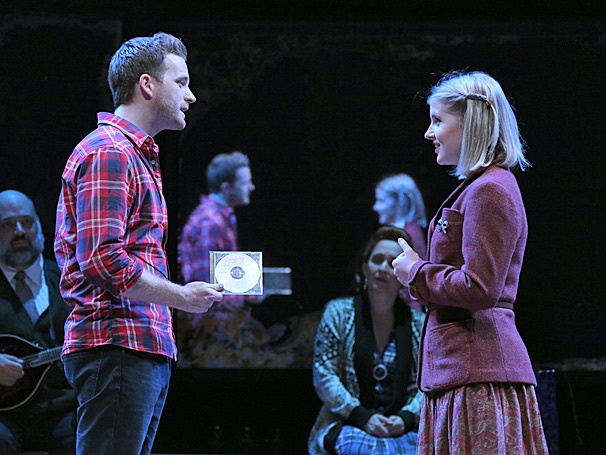 Love’s all very well but in the hands of people it all turns to soup. There is a delicious soup like no other presented in the form of Broadway’s 8-Tony Award-Winning musical Once making it’s Baltimore debut at the Hippodrome Theatre as a part of the 2014-2015 Broadway Across America— CareFirst Hippodrome Broadway series. Stunning music and lyrics by Glen Hansard and Markèta Irglovà and book by Enda Walsh, this brilliantly beautiful musical experience is an epic classic slowly being born. Honest, moving, and heartwarming; Once is emotionally cathartic and grips at your heartstrings from the opening number right through the finale.

An evocative ensemble piece Directed by John Tiffany with Musical Supervision and Orchestrations by Martin Lowe, the show is seizing the hearts of audiences across America and squeezing until love is felt. It doesn’t matter that it takes place in Dublin, or that the music is a little folksy, the story is that of all human beings: love is messy and complicated and completely raw and emotional. The show is moving, engaging, and the chance of a lifetime to share in a brilliant original idea the likes of which are far too scarce these days in new musicals.

Scenic Designer Bob Crowley sets the mood with assistance from Lighting Designer Natasha Katz. The arc of the antiquated pub that serves as every location therein is rustically charming; dreary yet hopeful. Crowley relies on the simplicity of the tarnished mirrors, a symbolic representation of life’s constant reflections on and of ourselves to assist the wonder of the story. Katz’ designs highlight emotionally intense moments with the softest of touches. Keeping the house in full light until halfway through the first number really ensures that the audience is along for the journey, swept up in the magic and not just dumped into the show.

Fluid movement. Deliberate movement. All designed by Steven Hoggett. Each character also plays one if not several instruments and a great deal of the show’s stunning wonder comes from the way these actors move with their instruments. Hoggett’s choreography is deliberate and intense; percussive in places as scenes whirl in and out of existence as if dancing alone could create a moment and destroy it as well. Fascination; the true experience of watching these performers move about the stage under Hoggett’s vision. The continual bodily movements tell stories and incorporating the instruments enhances the experience tenfold.

Though the story focuses around Guy and Girl the performance is truly an exceptional ensemble piece. From the top of the show with Da (Raymond Bokhour) and his melancholically moving mandolin number to the ferocious efforts of Svec (at this performance Zander Meisner) on the drums, every person, every instrument, every moment has its place and they all radiate with dazzling honesty in this performance.

Billy (Evan Harrington) is a bit of a comic menace to the storyline, but squeezed into the plot in all the right places. Harrington, though hyper animated and wildly engaging, tamps the performance down and balances his comic outburst so as not to upset the delicate balance of mournful bliss that carries throughout the show. His vibrant larger than life quality does result in a great deal of amusement and adds a comedic relief in places where it is needed to keep the audience from flooding the house with their tears.

Baruska (Donna Garner) is a fierce presence that echoes throughout the performance even before her character is introduced. Though Garner has no featured solos her voice is easily recognizable; the rich robust quality sailing through the ensemble numbers. Her stalwart nature aligns to the epitome of the ‘serious Czech’ stereotype. Other performances of note include violinists Erica Swindell and Claire Wellin, the latter of whom plays the feisty Rèza with a bold passion.

From the dawning of time it has simply come down to a Girl (Dani deWaal) and a Guy (Stuart Ward.) Once is no exception to this tradition. deWaal and Ward have exceptional chemistry; their humors blend to perfection and the scenes they share are divine. Even more so are the duets that their voices bring to life. “Falling Slowly” is the first time their voices blend in song and the way they carry their melodies and harmonies thoroughly explores the depths of their emotions. The other instruments creep so delicately into this song that by the time the crescendo of brilliant sound washes over the audience it is musical perfection.

deWaal is a captivating creature on the stage. Her strong Czech accent grounds her character and her keen sense of comic timing is utter perfection. Her portion of “If You Want Me” is striking and haunting; a wondrous amalgamation of tragic beauty of endless emotion all flowing forth from her gorgeous voice. Her singing is mesmerizing. “Hill Song” is truly touching; creating a glimmering glimpse into the vulnerability of her broken yet strengthened heart.

Ward is astonishing. His raw, unadulterated passions blend into the emotional outcry of his music and the show becomes phenomenal. From his opening number “Leave” which is bursting with a plethora of angry feelings to the way he closes the show with “Falling Slowly (Reprise)” he captivates the audience. A musical Odyssey, Ward’s portion of “When Your Mind’s Made Up” bares his soul for all to hear. “Gold” becomes a steady build of emotional catharsis for Ward’s character, with the ensemble feeling his heart crying and carrying the song of his spirit into ecstatic rapture. Musical ecstasy never felt so good as when Ward leads the cast into this number and again at the finale.

A truly striking and beautiful musical; you only have one chance to enjoy it.

Once plays through September 14, 2014 at The Hippodrome Theatre— 12 N. Eutaw Street in downtown Baltimore, MD. Tickets are available for purchase by calling the box office at (410) 547-7328 or by purchasing them online.

Review: Beauty & The Beast at The Hippodrome

Review: A Christmas Story at The Hippodrome Theatre
Close