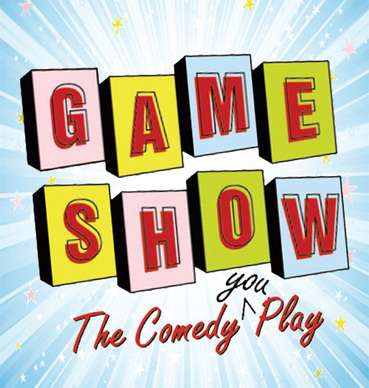 Ladies and Gentlemen! Step right up and come on down! You’re the next contestant on Game Show! Taglined as “The Comedy You Play” The Audrey Herman Spotlighters Theatre kicks off their 53rd season with a unique audience interactive show. Directed by Kristen Cooley, this zany participatory program keeps the audience laughing and involved in a real live game show while a melodramatic comic plot unwinds around the host and all the members of the production team. Bring you’re A-game, your thinking cap, and all the useless trivia your brain can muster because you never know what you might win!

Resident Set Designer and Scenic Artist Alan Zemla has spruced up the stage to give the intimate space a touch of tacky throwback. Though the game show takes place in present day, Zemla’s bright blue marbling on the floor and shimmery streamer curtains smacks of a 70’s or an 80’s game show set. This creates the perfect level of hokey atmosphere for the show. Zemla’s attention to detail and hidden Easter eggs across the set never cease to amaze; the producer’s office alone which is tucked off to the side of the main stage is riddled with wall cracks and other minutia to make it look derelict and ruinous. There’s even a Days of Our Lives awards plaque and an Emmy statue tucked up in the corner to complete the look of faded glory for the network producer who inhibits the space.

Director Kristen Cooley handles the blend of live unscripted audience involvement with the scripted comedy almost perfectly. Though the preshow involvement of actors is a bit sluggish and drawn out for the most part what the audiences sees is what they get; a bunch of quirky characters that have ridiculous storylines that all fold into the absurdly entertaining quickly-escalating plotline. The pacing is mostly on point though at times the transitions from the actual game show— which involves audience members coming up and down on the stage— back into the scripted segments of the show is a little clunky. Overall the show keeps your attention, whether you’re an interactive part of it or not and the acting is refreshing and comical.

The main attraction is suave, charming TV personality Troy Richards (Jeff Burch) and if you’re really lucky you might just get an autographed photo from him! Burch is the epitome of classic game show host, with all the charm of Richard Dawson, all the pizzazz of Bob Barker, and all the energy of a spry fellow reminiscing the days of his youth. Burch’s built-in personality is a surefire fit for the role; he handles the audience with ease and makes them feel at home on his “stage” without ever missing a beat. In-scene he’s a highly functional component of the show’s underlying plot as well; brilliance in both scripted and unscripted work.

The supporting cast is populated with a series of whacky characters that really turn your head and make you think about the inner workings of a television game show. None of these characters are as visceral or as biting as Ellen Ryan (Elisa Dugan) the show’s snappy producer. It quickly becomes an internal game who’s screwing who once Dugan gets involved; her acerbic tongue and short-fused temper really lighting sparks for a powder keg the closer the show rolls to the end. Her isolated moments of sheer eruption mimic exactly what is expected when a producer loses their cool and become laughable all round for those engaged in the plot.

Scene stealers are practically a dime a dozen in this production as well, everyone having their moment to shine. Whether it’s Jen Skar as a surprising character toward the end of the show that really shakes up the dynamic of the plot or Zack Miller playing the goofy, albeit meatheaded Stevie Fox. Miller’s television persona is both cheesy and dopey, working the audience at hyper speed to keep them engaged, but he’s as two-faced as many of the other characters in this production, keeping it real with self-interest.

Gerry (TC Caldwell) Joe (Joey Krastel) and Johnny (Henry Reisinger) are essentially the three Stooges of the production team. Not elevated to the slapstick level of hilarity, they find their own unique blend of comedy to bring to the stage. Caldwell and Krastel spend a fair bit of time bickering in a humorous fashion while Reisinger plays the awkward nerdy man out. It’s Reisinger’s eager-beaver nature that catches Troy Richards’ eye and keeps the audience in stitches every time they interact.

Chock full of humorous moments, insane characters, ridiculous plot-twists, and a great chance for the audience to be a part of the show, Game Show is the show for you if you want to have an evening of live and engaging fun. You might even win the grand prize if you’re lucky enough! Be sure to stop by before the show makes its final live broadcast on October 5th!

God of Carnage at The Audrey Herman Spotlighters Theatre

Romeo and Juliet at Spotlighters Theatre by Amanda Gunther
Close