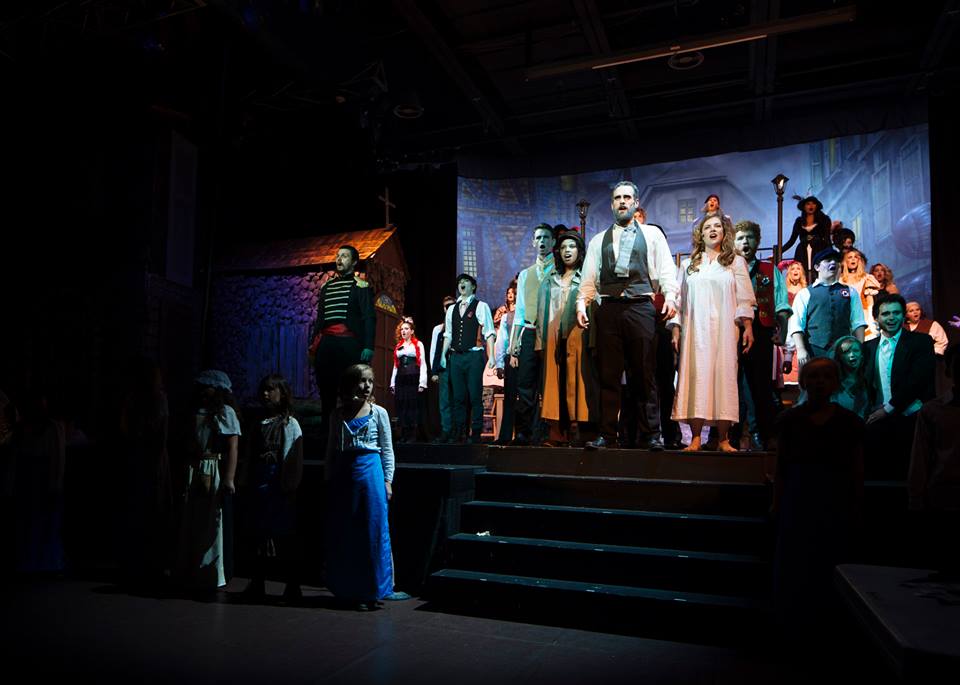 Here upon the Sacred Heart stage they will build their barricade. And build a barricade they did! Presenting in its entirety the international musical sensation, the Glyndon Area Players take on Les Miserables as their 2014 production selection. Directed by Homero Bayarena with Orchestral Direction provided by Matthew Hartman and Vocal Musical Direction provided by Jeff Morrison, audiences everywhere will hear the people sing if only for nine performances. Refining the musical that everyone is doing, Bayarena infuses notes from the novel as well as his own directorial vision into the production to make this performance stand out from the many others that have been playing across the area all summer long. Maintaining the traditional story arcs and character castings, Bayarena finds ways to tell the story like it has never been told before.

When Les Miserables comes to mind, immediately the barricade and how it will be constructed and handled soon follows that thought. Director Homero Bayarena, working with Set Designer Michael Parks, conceptualizes a traditional and yet imaginative approach to the barricade. It roles in seamlessly, hidden by the brick walls of the streets of Paris, but it is not just your typical furniture dump truck of things gathered together. A prominent wagon wheel can be noted near the center of the barricade as well as a derelict farmer’s rake; items like this and many others were featured previously in the production during various scenes leading up to the assembly of the barricade. Bayarena and Parks create an authenticity in using these hidden gems as it creates the notion that the boys of the revolution pulled everything they could find from the streets to fortify their fortress.

Bayarena and Parks construct a two-tiered set with windows that are perfect for the scene during “Lovely Ladies” and their sewer grate actually goes beneath the stage. It is these little touches of reality that draws the audience into the world of Les Miserables; inviting them to experience it as the characters do. The concept behind handling the bridge is another impressive technique; but if you wish to see how this theatre company handles it, you’ll have to get tickets to the show.

Costume Designer Kari O’Donnell, again working with Bayarena, turns out impressive pieces for the company of 74. O’Donnell’s most impressive work is scene in the costumes used on the ‘Lovely Ladies.’ Fitting corsets and appropriately colored skirts with matching feathered hats do these darkened divas a world of justice. All too often modern liberties are taken for this particular set of costumes and the effect is jarring. O’Donnell and Bayarena work to simplify the other costumes featured throughout the show, the students of the barricade wearing little pins rather than cumbersome sashes and militant jackets, allowing the strife of their struggle to speak through their songs rather than their outfits.

With Orchestrations led by Matthew Hartman and the Company led by Jeff Morrison there is little doubt that you will hear the people sing when it comes to ensemble numbers like “At the End of the Day” and “One Day More.” Hartman does an exceptional job at balancing the sound of his live orchestra, which sits just off to the side of the stage fully exposed. All too often orchestras that are not shielded or sound guarded easily overwhelm the sound of the performers on-stage but Hartman’s keen ear and sense of volume control prevents this from occurring. Morrison creates great swells of sound from the ensemble throughout this production; sound that is needed for numbers like “Do You Hear the People Sing?” so that the message of optimistic triumph resonates throughout the auditorium.

Director Homero Bayarena is making unique choices across the board. The enormous scenic pieces, while visually stunning, at times become cumbersome during shifts from one scene to the next. Minor pauses peppered throughout gum up the pacing in places but seems not to impede the overall momentum of the story as it progresses. Bayarena’s vision of telling the story hones in on one moment in specific— “I Dreamed a Dream.” Taking what used to be a solo number and an empty stage, Homero has transformed this song into a group performance featuring two groups of women— the factory workers and the lovely ladies— flanking Fantine on either side of the stage and singing background choral harmonies as she progresses through the song. It is jarring and unusual but not entirely unpleasant, even if the full notion behind it is a little unclear. The voices featured in the song, Fantine’s included, are stunning, even if the concept is strange.

Performances across the board in this production are impressive from the littlest of people— including little Cosette (at this performance Corinne Ertel) and Gavroche (Anthony Johnson)— right up to the big boys of the barricade— including the swell drunken Grantaire (Kevin D’Alessandro.) Doubling as Bamatabois, D’Alessandro has a robust voice that is versatile and fitted for either role. His approach to the salacious gentleman is unctuous and thoroughly off-putting in the best way possible, while his performance as the tottering student is decidedly intoxicating. D’Alessandro has a featured solo in “Drink with Me” where the anguish of his character is experienced through his voice, blending into a rather philosophic moment of emotional imbalance that speaks volumes of the back story of his character.

Leading the ragtag rebellion is Enjolras (Jacob Oland.) With a hearty sound, Oland leads the students to revolution through song, particularly his enormous sustains during “One Day More.” There is a tempered emotional side to Oland’s portrayal that is not usually witnessed in the role of Enjolras, but touching moments occur as the barricade begins to fall and it speaks well of the fact that he is just a well-educated youth with good intentions.

Marius (Henry Cyr) is a youth not unlike Enjolras, but driven by a different drum. His heart is full of love when it comes to Cosette (Libby Burgess) and this notion of love at first sight resonates through his voice during “A Heart Full of Love” a duet that is shared with Burgess. Cyr’s voice is strong with a clear resonance during his sustains and his emotional affections toward Burgess’ character are well-balanced into the depth of his character. Burgess brings a warm, albeit defiant, presence to the generally vapid character of Cosette. Her voice is dulcet and inviting and “In My Life” becomes a graceful and sorrowful song of curious questions about her life. Together the pair makes great harmonies for the “A Heart Full of Love Reprise.” Cyr’s performance of “Empty Chairs at Empty Tables” should be noted for its gradual emotional build; a heart-aching break of torment which gushes forth at the apex of the song delivered in the purest of voices creates for a harrowing moment.

Eponine (Christina Bagley) has eyes only for Marius, despite always being unrequited. Her presence of mind when it comes to the character is impressive; her grounded reality of the character’s dual realities is astonishing. Being able to live inside the hopeful fantasy of loving a man who will never love her back, Bagley emotes the juxtaposition of her fantasy life and her harsh reality with sublime intent during “On My Own.” He rendition of “A Little Fall of Rain” is heartbreaking. Bagley is a vocal gift to this production; an impressive range and strict command over her pitch control making for an exceptional performance.

Fantine (Dawn O’Croinin) is an equally depressing character whose fate is quite similar to that of Eponine’s. O’Croinin has a powerful and stunning voice, finding the churning emotional depth of “I Dreamed a Dream” despite the song no longer being a featured solo. Her utter torment during the street scene of “Fantine’s Arrest” radiates in mournful waves out over the audience. The vision of seeing Little Cosette during her solo during the hospital scene creates a tear-jerking moment similar to the one created when the audience watches her hair shorn live on stage during “Lovely Ladies.” O’Croinin has a brilliant voice and it is an inviting sound to hear during the “Epilogue” a duet moment shared with both Christina Bagley and Jean Valjean.

Playing the lead of Jean Valjean, Tom Zepp does the character a great justice. As a baritone/bass classically trained performer, Zepp gives a tremendously impressive rendition of “Bring Him Home,” throwing his voice into gentle melts of falsetto to make the song aural bliss. His vocal command is striking, particularly during “The Confrontation” which is an edgy duet shared with Inspector Javert (Cameron Casey.) Zepp’s stage presence is astonishing as well, fully living every minute of his story as he uses his voice to tell the tale. The emotions etched into his face further translate the struggles he has faced from the onset of the show; matching flawlessly with his expressive voice. “One Day More” is a song bursting with vigor as Zepp leads the company into the act I finale. A truly remarkable performer, the young man gives a new life to the iconic character.

One Mis More— you only have a few more chances to experience this epic musical with all of the quirks and curious new lights shed upon it; Glyndon Area Players’ production will not be around forever.

Running Time: Approximately 3 hours and 15 minutes with one intermission

Les Miserables plays through August 17, 2014 at the Glyndon Area Players on the gymnasium stage of the Sacred Heart School— 63 Sacred Heart Lane in Reisterstown, MD. Tickets can be purchased at the door  or in advance online.