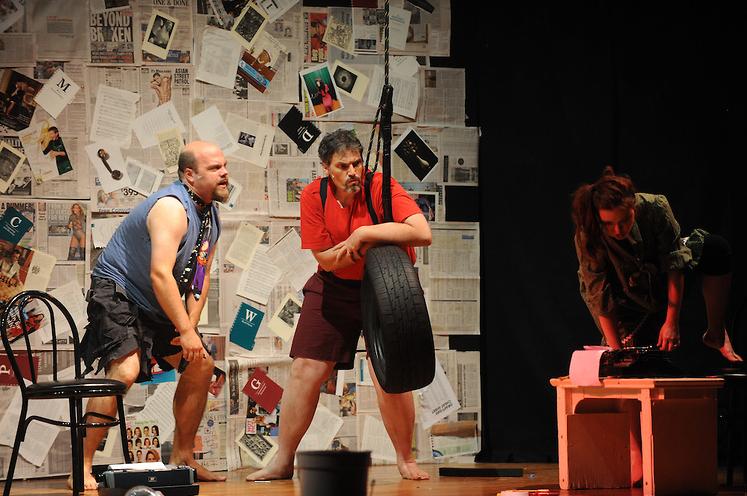 Life is but a moment? Or life is what you make of it. Heritage Players are making life out to be a hilarious evening of comic curiosities with their summer production of David Ives’ All in the Timing. Co-Produced by Ryan Geiger and Stephen Deininger, this grouping of six one-acts is a hilarious series of unrelated vignettes that examine the minutia of life in an absurd fashion. Treating the project like a theatrical incubator of sorts, Deininger and Geiger are providing experimental and exploratory opportunities for actors and directors alike with this work. Assigning each of the six mini-shows to a different director and varying the casting throughout, the work presented in this way allows new faces to the directing and acting scene to test the waters and get experience under their belt. The results are extremely impressive, not to mention hysterical and a night of hilarity and hyjinx ensues for all.

Directed by David Hale, this three-person sketch is humorous and ripe with crude language for the sake of defining situational flavor. Mark (Tim Wolf) finds himself unable to achieve anything that he wants or needs that day and his dear friend Al (Stuart Kazanow) that he meets in a café, less than politely explains to him that he is trapped in “a Philadelphia.” Kazanow and Wolf are both guided under Hale’s keen direction to have explosive moments; Wolf leaning more toward the hysteric and frazzled side of the spectrum while Kazanow is pushed with rage in the direction of fury. The timing in this sketch is seamless, each little pocket of comedy erupting with precision, particularly when the Waitress (Amanda Fossett) joins the commotion and contributes to things falling apart.

Directed by Jonathon Sachsman, this one-act features two actors with a third character created by a bell-ringer. Every time a line is delivered in the exchange between Bill (Peter Eichman) and Betty (Elizabeth Worthington) that results in the termination of the scene, the bell rings, and the scene is rewound and restarted with slightly different results. Sachsman takes an unusual approach to the presence of the bell-ringer, having him act as more of a responsive and reactive entity— largely to Worthington’s character’s distastes of things in the scene— rather than as a proactive being that is guiding and shaping the moments on the stage. The pacing is a bit slack in this sketch, but with tightening it can easily blossom into comic gold.

Need. Help. Sir? Directed. By. Andrew. Worthington. Jarring. Startling. Hilarious. Choreography. Absurdity. Worthington. Creates. Insanity. Repeat. (Follow that rhythm for about twenty minutes and you get the idea.) Outside of the absurdity, the piece is wildly entertaining and each of the four performers therein— Amanda Fossett and Kat McKerrow as random women as well as Stuart Kazanow playing the title character and the Director playing the Baker— has a little comic niche in which they deliver their startling discoveries. McKerrow works with facial expressions, while Fossett plays with how she presents her physicality. Kazanow uses the words to express the sheer confusion of the segment, and Worthington uses gestures. Overall the piece makes no sense whatsoever, but it isn’t supposed to, making it perfect.

Variations on the Death of Trotsky

Directed by Joshua McKerrow, this is the third sketch that focuses a fair bet on repetition in regards to sourcing its humor. McKerrow’s decision to leave out the outrageous accents that accompany these characters is only slightly distracting as their passionate hilarity mostly overcomes its absence. Kat McKerrow, playing Mrs. Trotsky, is hot to trot with her pun delivery midway through. Peter Eichman, who plays Leon Trotsky, has a noble, albeit idiotic, sense of self-preservation about his character. The sketch is short and punch-lines delivered swiftly.

Angst argo mock melgibson du da bop. Quisling? Now Dawn (Emily Lambert) and Don (Andrew Worthington) would have understood that perfectly. Werner Herzoged (Directed, for those of you less than proficient in Unamunda) by Stephen Deininger, this production is “bleeny!” Deininger constructs a living reality of this imaginary universal language inside the perimeters of this one-act. Lambert’s character starts off with a terrible stutter that at times is a bit too put-on, but for the most part it serves its purpose. Worthington makes believable sense out of his gibberish speak and as soon as Lambert’s character catches on they are building a world together in nonsense talk. Their emotional enthusiasm that transcends the babbling blather is what makes the scene so fascinating and utterly amusing.

Three chimps in a room typing away into infinity and they’re bound to produce Hamlet, right? Drew Loughlin is the Directorial monkey for this piece; and as they say save the funniest for last! Kat McKerrow, Stuart Kazanow, and Peter Eichman all take on roles as chimpanzees— some more frustrated than others. Simply put— shenanigans ensue. McKerrow creates uproarious moments when she starts peeling a banana and eating it— with her feet. Kazanow is prone to outbursts of chimp-rage, loping about the space and banging on his chest like King Kong. Eichman is the milder of the three, using his words to express the discontent of their situation. All three performers should be given peanuts for their ability to maintain their Hominidae-like physicality.

It won’t be around long, this menagerie of comedy, so be sure to get your tickets soon. And a tip of the hat in the general direction of the Sound Designers (Stuart Kazanow and Drew Loughlin) goes a long way as their scene change music leading into each segment is wildly fitting and often hilariously ironic. Be sure your timing is right so that you can catch All in the Timing before time runs out!

Running Time: 95 minutes with one intermission

The Spanish Tragedy at The Mobtown Players