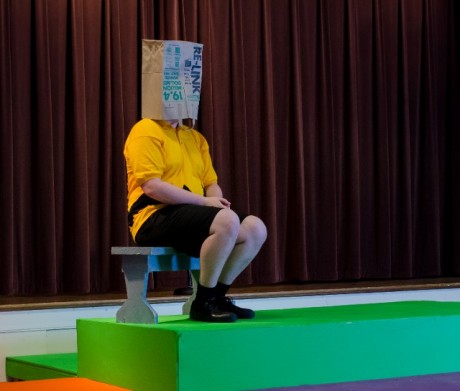 It’s suppertime! And the Liberty Showcase Theatre is serving up a scrumptious dish of musical theatre this summer with their production of the original You’re a Good Man, Charlie Brown. Directed by David Morey with Musical Direction by Peter Morey, the classic Peanuts gang is looking real sharp and sounding real good. While the revival version of the production may have catchier tunes and quirkier characters, this originating start is a great place to sit back and enjoy an adorable blockhead and his musically inclined friends. 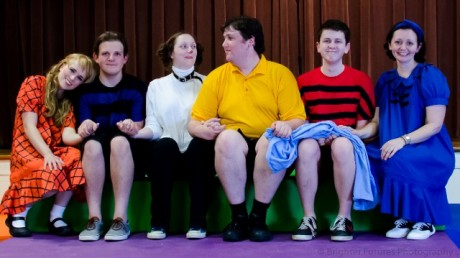 Director David Morey keeps things simple. The costumes and the set both assembled and designed by him and the cast are cartoonish but in a very simplistic manner. It’s keeping to this very basic approach that allows the true talent— the small orchestra headed by Peter Morey and the six performers— to truly shine. Bright wooden blocks of orange, green, purple, and blue serve as the stage. This in a sense is a subtle representation of childhood; children’s toys beneath the feet of the group of fun-loving children from the classic comic strip. Snoopy’s iconic red dog house is fixed in place toward the back of the stage and looks as if it was peeled up from a newspaper of yesterday to be featured in this show.

Musical Director Peter Morey creates the sound of a full orchestra with just his keyboard, a series of other instruments and a few other musicians. It is the way he handles the little interludes of music featured between songs that keeps the pace of this show moving, guiding each little episode forward. Finding a good balance between the musical interludes and the larger musical numbers, Morey balances the volume in the open space so that there are very few times where the orchestrations overwhelm the singers.

David Morey executes the episodic nature of this performance with precision. Nearly every scene exists outside of itself and others; mirroring the non-sequitur style of the original comic strip. Morey guides the momentum of the production so that it keeps moving even when the scenes do not follow a linear agenda. His ability to do so keeps the show refreshing and moving along at a pleasant gallop. 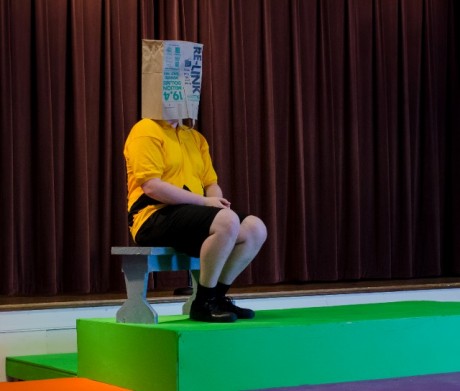 The performances all across the board are impressive, though at times a little soft-spoken. With a bit of volume adjustment, the show will have a spectacular sound. Ensemble numbers like the title number, “Glee Club Rehearsal” and “T-E-A-M” are robust and filled with spirit as the company of six make their childlike voices heard. Patty (Amanda Fossett) who has no solo numbers of her own, blends well for harmonies during these numbers and has a cheery kid’s smile throughout the performance. Fossett’s featured moment a spoken sketch where she showcases spunk and gumption in her attempt to deliver the pledge of allegiance to the flag.

Schroeder (Nick Pacheco) is a relatively mild character who spends most of his time being terrified by and running away from Lucy. Pacheco really gets his moment in the spotlight during “The Book Report” where his character gives an overly enthusiastic account of Robin Hood, when he’s meant to be discussing Peter Rabbit. Pacheco leaps and bounds about the stage, putting his vocal excitement to use in this number; by comparison to his mild but pleasing sound in other numbers like “Happiness” it makes for a versatile performance.

Linus (Quentin Patrick) is a terribly shy, albeit infantile, character with a chronic need for his blanket. His featured number, “My Blanket and Me” is a riot as Patrick hams up each of the daring dance moves he performs with the little blue piece of cloth, dipping it and whirling it around the stage. Patrick’s voice is quite full; a hearty sound for such a meager character, which creates a humorous irony in his performance. Patrick’s non-musical performance creates strong moments of entertainment as well, particularly when interacting with Lucy (Laura Marchiano) during the survey-encounter; the zingers that fly forth from his character landing with quite the zesty sing!

Marchiano’s approach to the crabby, bossy, and otherwise mostly odious character, at first is a bit mild in her musical approach. Marchiano has a lovely almost operatic quality to her voice when singing “Schroeder” and this juxtaposes strangely against her bristly and feisty nature. Later when she’s on her tirade during “Queen Lucy” and when she tries to explain the world during “Little Known Facts” she breaks that melodic sound for something much sharper and more irritating that better suits the character’s personality. Marchiano delivers a strong biting attitude as this crabby little girl.

Charlie Brown (Joseph Rolandelli) is the epitome of a blockhead, a failure face, and all the other fine labels that Lucy affixes to him throughout the performance. Rolandelli plays the melancholic, slightly depressive character with a pathetic charm. His voice is the quietest of the performers in the production, but when he does land his solo “The Kite” there is a sudden vocal surge, fueled by the startling enthusiasm of successfully flying the kite, that really gives his voice a boost.

What boy would be complete without man’s best friend? And of course, the loveable Snoopy (Jennifer Toll) takes on that role for Charlie Brown. Rolandelli and Toll have a brilliantly comic scene together featured just before and leading into “The Doctor is In (Dr. Lucy)” where a simple game of fetch is turned into a scene stealing moment by Toll’s character. Forced to beg silently while Charlie Brown turns his attentions to Lucy, Toll starts a series of miming and gestures, going so far as to play invisible fetch with herself by enacting the part of both Snoopy and Charlie Brown and the whole event occurs in the background as a hilarious moment.

Toll has gusto for “Suppertime” the big show-stopping number near the end of the performance, tackling it with vigor and really laying into the lower end of her vocal range to give it a swanky jazzy sound. The hyper theatrics performed during “The Red Baron” as well as in the middle of “Snoopy” are most fitting for the hammy dog; Toll giving them depth beyond just simple comic melodrama. Toll creates a fascinating character shift from the sweet, loveable dog to vicious jungle savage during “Snoopy” as well; a brilliant thing to see in a character whose sole purpose is added entertainment. 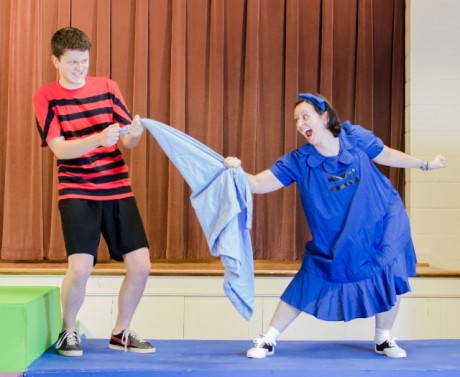 These Peanuts won’t last long, and you won’t want to miss your chance to see the rarely done original version of the show. Liberty Showcase Theatre is the way to go this summer if you’re looking for a little classic happiness, and you’ll find it in their production of You’re a Good Man, Charlie Brown.

Running Time: 95 minutes with one intermission

You’re a Good Man, Charlie Brown plays through July 26, 2014 at the Liberty Showcase Theatre located at the Glyndon United Methodist Church— 4713 Butler Road in Glyndon, MD. Tickets may be purchased at the door or in advance online.

Review: Four Weddings and an Elvis at Bay Theatre Company