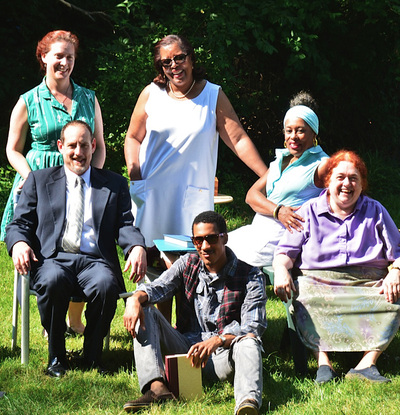 Agatha Christie. The name immediately draws to mind thrilling murder mysteries of the ‘who-dunnit’ era of the utmost suspenseful caliber. Thunderous Productions in the black box theatrical space at the Greenbelt Arts Center, mounts a lesser known Christie work that showcases the versatility of the famed mystery writer’s crafting ability. Verdict, a play wherein the suspenseful twists keep turning even though the killer is revealed immediately. Directed by Rick Starkweather, this intriguing drama is a wonderful sampling of Christie’s lesser recognized works.

Director Rick Starkweather serves as the show’s Set Designer as well. Creating the front room and library of Professor Hendryk is a tricky task given the unique spacing at GAC, but Starkweather manages to create a convincing set. There’s even a little irony in his design work as he’s laid stacks of books throughout the space to create the clutter of the professor’s collection covering nearly every surface; a character then delivers the line “there are so many books there’s hardly a place to sit down” and three characters take their seats all at once right thereafter. Little nuances like this show Starkweather’s familiarity and knowledge of the script.

The major issue with the production is the pacing. There are often moments where lapses in dialogue occur losing the natural momentum of the show’s progression. Lines need to jump more readily on top of one another and the overall delivery of the show needs more urgency behind it, particularly during scenes of great dramatic tension. That said, Starkweather finds a curious way to block various scenes between pairs of actors— primarily Karl and any female he’s encountering. The magnetism that pulls the pair of performers toward each other while they deliver lines at one another and then are quickly and physically repelled from one another is symbolic of the turmoil in which the protagonist finds himself throughout the play.

Accents run amuck in this production, some landing with a solid sound— like the clipped German sound provided by Doctor Stoner (Jeff Robert) or the crisp but faded German sound well articulated by Anya Hendryk (Trix Whitehall.) Even the subtle hints of Bostonian accent that are caught in Lester Cole’s (Joshua Pigatt) lines enhance the performance. But other attempts at accents, like the over annunciated Jamaican attempt from Mrs. Roper (Annette Landers) and the confusing sounds put forth by Lisa Koletski (Hillary Glass) and Karl Hendryk (Bob Kleinberg) end up detracting from the show. In these cases the actors struggle to authenticate the accent and lose track of their text as well as their delivery speed, causing some of the major lag in the show’s overall momentum.

Trix Whitehall, playing the invalid Anya, does an exceptional job of creating physical consistency within the confines of her character. It’s the little details— the way her left hand trembles when she’s attempted to knit, or the way she leans slightly off to the left side in her wheelchair when complaining of her miserable life— that allow her character to be engaging. Though her role is short-lived, she is one of the most dynamically present characters in the production.

Playing the seductive Helen Rollander is first-time actor (since school) Devonna Burowes. Using her body to punctuate the character’s sensual tendencies, particularly when flirting with Karl, Burowes comes into her own in this role, letting her body language fill in the gaps of her text. Playing the equally haughty and arrogant Rollander mother figure is Muriel McNair, and her delivery during the bribery scene is both unique and poignant.

Joshua Pigatt deserves a nod for his dual roles in the production, first as the seemingly out of place stoner child of the 60’s and later as the brusque and hard-as-nails detective. Pigatt’s roles may be minor but he makes every attempt to live them fully. As the stoner Lester Cole he has a noteworthy moment late in the second act when he does a ‘double-take’ style exit, rushing back to grab the tray of sandwiches, alluding to the fact that he has the perpetual munchies. As the detective, Pigatt is firm and fierce in his textual delivery, particularly when he reads the headlines from the newspaper.

This particular Agatha Christie play will surprise you with its format, a bit different from her usual suspenseful thrillers; still every bit a Christie mystery if ever there was one, however.

Verdictplays through July 13, 2014 through Thunderous Productions at the Greenbelt Arts Center— 123 Centerway in Greenbelt, MD. For tickets call (301) 441-8770 or purchase them online.

Agatha Christie’s Murder on the Nile at Thunderous Productions