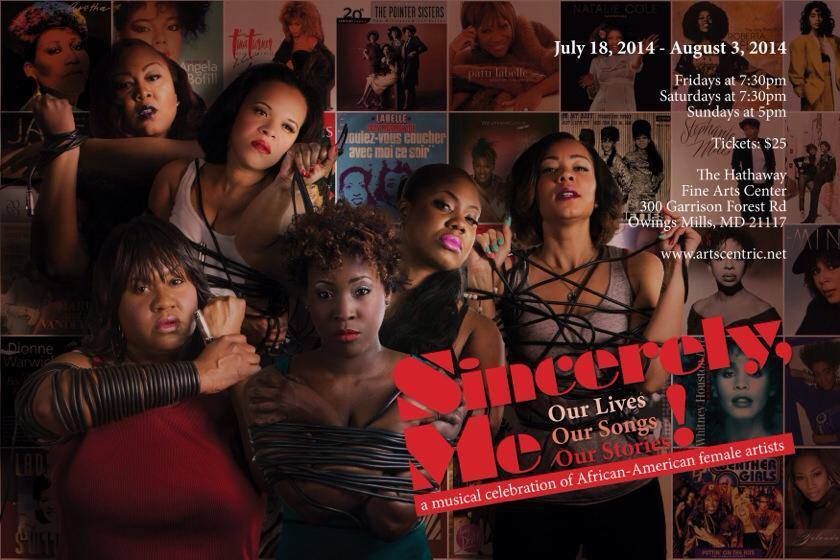 With just six performers and a blank stage, Director Kevin McAllister sets the mood to really showcase the meaning behind these selected songs as well as the powerhouse beltress voices that he has chosen to work within the piece. Enhanced by Graphics and Multimedia Designer Stacie Munoz, the performance features projections onto the center of the floor of various artists and their album covers throughout the production so that in the event a tune is a little less than familiar, there is a visual aid to assist the audience in recognizing it. Lighting Designer Lynn Joslin also adds a bit of flare to the show with red and blue effects timed for specific numbers.

McAllister writes a segment of audience interaction into the show as well, inviting an audience member up to play a game of “Choose Your Future” where the girls throw said member into a scenario and play it out by singing African-American female artist songs in their general direction. This section becomes wildly entertaining as anything can happen when the audience is invited into the performance bubble. Musical Director Cedric D. Lyles, who also heads up the on-stage musicians as well as playing the keyboard, really drives home a fulfilling sound from these six super-singing sensations. There is nary a moment where their full emotional connection doesn’t ring through these powerful belts, and even when tempered and subdued the truth of what they are singing surges through and effects the audience deeply.

As a group the six female performers are stellar. As soloists they are phenomenal. In their turn each takes the lead on a song, or starts off a number, belting out their vocal prowess for all to hear. It isn’t until late in the second act that each singer is given a completely empty stage upon which to perform a solo; a truly stunning moment for each individual. It is difficult to list just who sang what as the program included no song list, but again the graphic projections on the floor aided in this a bit. As there is no one woman more talented than the next and they all work exceptionally well to transfer a radiant energy to the audience, I’ll make mention of them in alphabetical order.

Andrea Albert has a soulful voice that is loud and full of emotion. Taking the lead during the “girl group” section on The Emotions number “Don’t Ask My Neighbor” she easily slides into an enormous soprano sound that is shocking and pleasing to hear. Another shining moment for Albert is her fiery accompaniment to Nina Simone’s “Four Women,” joining in as the last part of ‘Peaches.’ Her thunderous verse added here completes a mighty quartet that really sparks the audience to life.

Kelli Blackwell is a contender for most ferocious vocal performer of the summer season with her blasting belts that are powerful enough to wake up Rip Van Winkle. Her fiery stompin’ rendition of “Mississippi, God Damn,” really sets her blood boiling and you can feel the injustice burning through this song. Her voice rings out in the quartet harmonies of “Sweet Inspiration” along with other group numbers where she is performing backup; the soloist whose voice will be heard. Her overall stage presence is commanding and delivered with comic exception, a person that you will recognize whatever style of music she’s singing.

Crystal Freeman, who does a lot of the ‘host’ duties for the evening, reaching out to speak with the audience particularly at the end of the show, has an incredibly high range as well as a massive belt swelling up from her soul. Her untitled gospel solo during the church segment of Act II is awe-inspiring, as she scales her voice up and down her vocal range, belting these genuine sensations of love and faith through this number. Leading the girls for Honey Come’s “Wanted” she puts her sassy side in control and showcases her versatility as a performer.

Ashley Johnson takes the acting cake in this production, throwing diva fits left, right, and center, particularly when pushing to get Diana Ross featured during the opening “girl group” segments. When she does finally don the white fur coat she does exceptional justice channeling the lead Supreme in “Love Child.” Johnson also provides the show’s first sung notes; a powerful blast of her vocal capabilities. Aside from providing a great deal of comedy— especially during the audience interactive as she becomes the narrative guiding figure— Johnson delivers a stunning tribute to Whitney Houston with her rendition of “I Have Nothing,” belting to the rafters and back, every note filled with honest and raw emotion.

Shayla Lowe sends shivers down the audience’s spines with her tragic and haunting rendition of Billie Holiday’s “Strange Fruit.” The emotional capacity that she conveys into this and every song she sings is mind-blowing. Lowe’s dance moves also add a flavor all their own to this performance when she starts shuffling and steppin’ out. Her stunning range is again showcased during the tribute to all of the female artists who have gone before us; “No More Weepin’ and Wailin’” becoming almost as harrowing and touching as her Billie Holiday number.

Brittney Wright adds comic flair to her performance similar to Johnson, but is just as vocally spry and boisterous with her big belting sound. Leading a stick-clack circle for The Dixie Cups “Iko Iko” she gets the whole group going Acapella without microphones for this number. Performing Phyllis Hyman’s “Somewhere in My Lifetime” in her evening gown is a true tribute to the lounge singers of yester-yore; making every voice in the group proud with her rendition of this song. Wright adds a sauciness to the “Four Women” number as well, rolling in ablaze as ‘Sweet Thang.’

A stunning performance featuring sensational singers; a culturally relevant evening of theatre not to be missed. ArtsCentric is on the make with their visionary work and the music will speak to everyone who attends the performance.

Sincerely, Me plays through August 9, 2014 at ArtCentric at The Garland Theatre on the Garrison Forest School Campus— 300 Garrison Ford Road in Owings Mills, MD. For more information or to purchase tickets call the information line at (410) 363-8690 or purchase them online.

She’s Your Dreamgirl: An Interview with ArtCentric’s Crystal Freeman on playing Effie in Dreamgirls