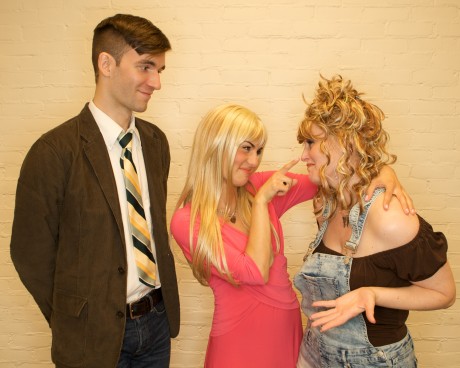 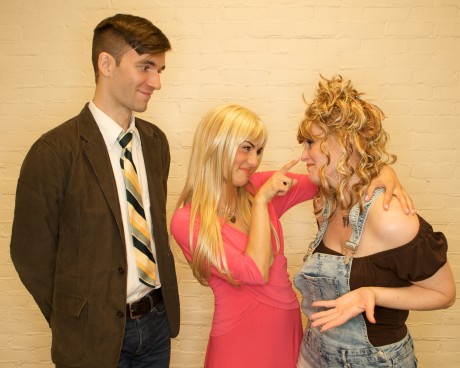 Nothing screams the sisters of Delta Nu like the bright pink sorority house backdrop designed by Set Designer G. Maurice “Moe” Conn. Putting his usual flare for elaborately impressive sets together, Conn transforms the stage of the community college from two-story party house into the serious campus of Harvard Law School. There’s a beauty salon and of course Elle’s perfectly pink dorm room, even a courtroom with a rotate-around shower and toilet! Conn gets all the scenes looking perfect with his efforts and really brings the audience into the reality of the show in this fashion.

Costume Coordinator Kaitlyn Howland does get the look going for these sorority sisters and Harvard law students. Although Elle’s patented pink lawyer suit never makes an appearance there is a plethora of the color for the lead character all throughout the performance. Howland’s most impressive venture in costumes is the garish orange jumpsuits for the prison scenes featuring Brooke Wyndham; they almost make life in a female correctional institute look appealing.

Choreographer Vincent Musgrave deserves a nod for the choreography handled in the prison scene during “Whipped Into Shape” as the jump ropes start flying in synch and the audience cheers on these daring moves. Other dance routines, like “What You Want” lack the clear and concise vision as well as the precise execution that Baker works into that scene. The dance routines on the whole felt clunky and unclean, and there were places where it felt like there could have been more dancing worked into numbers like the finale of “Blood in the Water” and more could have been done with “Bend and Snap” to appease the up tempo energetic nature of the book and score.

Little Miss Woods, Elle— also known by the moniker of the show’s title, Elle Woods (Bridget Linsenmeyer) gives a mixed bag performance. Starting off without much pizzazz for her features during “Omigod You Guys” and her solo bits during “Serious” Linsenmeyer’s portrayal of the ditzy but spunky fashionista fizzles out early. It isn’t until the end of Act I during “So Much Better” that Linsenmeyer settles into a comfortable niche, connecting to the character with genuine ease. Her vocals, while powerful, are often over-sung, forcing long belts with a harsh pop-quality to them in places that sound unnatural. The moments where she did make connections with the songs felt very presentational and put-on, an unfortunate performance of uneven proportions. Warner (Aaron Dalton) had similar issues with his performance, adapting a strange approach to singing “Serious.”

Despite these mishaps, the production had some truly stellar standout performers and moments making the show well worth enjoying. The hands-down scene stealer of the evening was Quae Simpson playing first a fabulous femme in drag, Kiki, and later the sassy boyfriend in the courtroom scene, Carlos. During the beauty salon scenes and even during the prison jump rope routine, Simpson is serving up some seriously fierce facial expressions, making himself noticed. His enormous sassy outburst during the courtroom scene is an uproarious experience that results in peals of laughter all around the house.

Another ensemble member to take note of is Peter N. Crews, playing Elle’s father and later a news reporter outside of the court scene. Crews, though having precious few lines, has the dance moves that are the most collected and on point, especially toward the end of Act II during the “Legally Blonde Remix” through to the end of the show. His haughty approach to the father character, though brief, is a reminder of Thurston Howell the Third straight off the S.S. Minnow.

Featured supporting players include Paulette (Tammy Oppel)— who develops a fabulously trashy accent and really digs into the airheaded depth of her quirky character— and Professor Callahan (John Desmone) who makes a wildly eccentric character choice that ends up mirroring the bland monotone stereotype of most stuffy office lawyers. Both Oppel and Desmone put their acting skills to the test here, and even manage their solos “Ireland” and “Blood in the Water” with ease respectively. 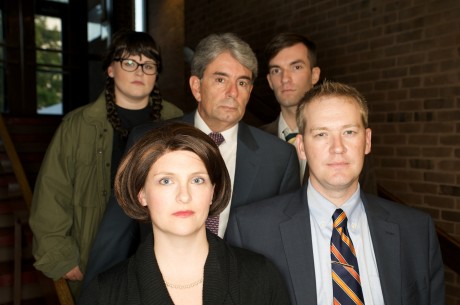 The sparkling pink diamonds in this Delta Nu rough aren’t sorority sisters or prison inmates or even really lawyers. Well, Emmett (James Baxter) is a lawyer in training and so is Vivienne (Tatiana Dalton). The pair have phenomenal voices that deserve recognition in this performance. Dalton, as the frigid and aloof Vivienne hides her vocal expertise right up until the end of the show, but when she does start belting out during “Legally Blonde Remix” and the “Find My Way/Finale” her vocal ferocity roars through and blasts everyone away with her capabilities. Baxter, as ‘Raggedy Corduroy’ does not wait nearly so long to showcase his singing abilities. “Chip on My Shoulder” is a stunning solo ballad that displays Baxter’s vocal prowess with pride. His character is thoroughly developed as well, making the happy ending in which he finds himself that much more rewarding.

Don your pink and head over to Cockpit in Court, there are some performances that truly shine in this production and you won’t want to miss your chance to bounce along with them and all the rest of Delta Nu in this pumping, well-paced show.

Legally Blonde plays through August 3, 2014 at Cockpit in Court— on the main stage of the Theatre Building of the Community of College of Baltimore County Essex Campus – 7201 Rossville Boulevard, in Rosedale, MD. For tickets, call the box office at (443) 840-2787, or purchase them online.

Review: The Wedding Singer at Cockpit in Court
Close