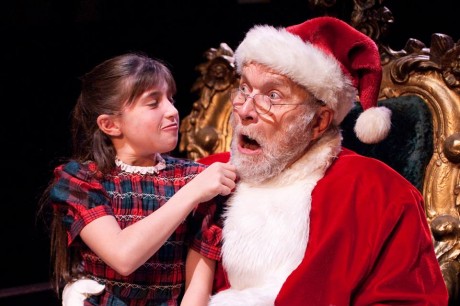 The age old question that hangs around the holiday season that has been debated, discussed, commercialized, and caused quite the stir over the years: Is there a Santa Claus? Doubt no more, for Toby’s Dinner Theatre of Columbia has the real thing— the proof’s in the pudding— as they bring Meredith Wilson’s  (The Music Man) musical version of Miracle on 34th Street to life just in time for Christmas. If happiness and cheer for the holiday season is what you’re after than Toby’s has it ringing through the rafters with their festive production; a truly honest approach to the true meaning of Christmas. It’s not about the presents or the giving and the getting but reminding everyone that at this special time of year we should find love. Directed by Shawn Kettering with Musical Direction by Douglas Lawler, Miracle on 34th Street is a resplendent holiday production that restores our faith in humanity at Christmas time, and will brings a warm and fuzzy feeling to your heart.

It’s beginning to look a lot like Christmas all around the theatre thanks to Scenic Designer David A. Hopkins. New York City never looked so ready for the holidays as the major department signs of Barneys, Saks, Lord & Taylor, and F.A.O. Schwartz glow brightly in each of the four corners. Hopkins strings garland and poinsettias from the ceiling and infuses the essence of Christmas throughout the space with twinkling lights and seasonal adornments. There truly is magic in the air for the holiday and you can see it the moment you walk through the door.

The simpler time of holidays gone by is highlighted by the fabulous costumes designed by Costumer Lawrence B. Munsey. Plenty of rich greens and reds to be found throughout the ensemble and the lively toy-costumes for the “Toy Ballet” are delicately detailed with bursts of imaginative splendor. Munsey fits the styles of Christmas time in 1960 with ease, especially for Doris Walker and the department store girls of Macy’s, taking the audience back to a time before all today’s crazy technology and reminding us all that it’s the little things that make the holiday season truly special.

Choreographer Mark Minnick lends his skill to the show with several routines that are most fitting for this cheery holiday musical. Minnick incorporates a lot of marching ensemble pieces for numbers like “The Big Ca-Lown Balloons” “Toy Ballet” and “The Plastic Alligator,” which involves an entire routine dedicated to the selling of the song’s namesake toy. Minnick keeps old Kris Kringle spry and jubilant, tapping and gliding about during “Here’s Love” and throughout the show in general. His routines are crisp but showcase simplicity letting the dancers’ dazzling smiles really enthrall the audience as they whirl and twirl through these enchanting numbers. Keep your eye out for those chair dancers in “She Hadda Go Back,” where Minnick subtly pays homage to the composer in his choreography.

Director Shawn Kettering and Musical Director Douglas Lawler create a holiday classic live on the stage for all to see. The iconic movie is forever in the minds of Americans everywhere but Kettering and Lawler go a step further to bring song and dance to eager theatre enthusiasts anxiously awaiting the arrival of Santa. The two show-stopping numbers that come to mind are gloriously campy and filled to the brim with seasonal spirit. “The Plastic Alligator” featuring Mr. Shellhammer (Darren McDonnell) and the Macy’s store clerks is a real hoot as McDonnell gives an over-the-top performance trying to pitch a sales gimmick for this ridiculous toy. The clerks (played by various ensemble members) really catch the contagious joy that McDonnell has to spread and roll with it trying to impressive Mr. Macy.

The other number that Kettering and Lawler orchestrate to perfection, the show-stopper of show-stoppers, is an uproariously funny moment in the courtroom in Act II featuring five of Toby’s seasoned veteran actors: Heather Marie Beck, Lawrence B. Munsey, Darren McDonnell, and David James thundering around the courtroom proudly during “My State” as they flimflam Judge Group (played by David Bosley-Reynolds). Beck, Munsey, McDonnell, James, and Reynolds throw levels of animated enthusiasm into this number, particularly when Reynolds breaks down and joins the merriment, which really left the audience laughing through the entire number.

Aside from spinning fabulous show-stopping scene, Musical Director Douglas Lawler creates a powerful and brilliantly bright sound from the ensemble. “Here’s Love” and “The Big Ca-lown Balloons” are two thoroughly enjoyable ensemble numbers.  Notable performances creeping out of the ensemble include female members Santina Maiolatesi and Coby Kay Callahan, both of whom share a rousing duet with rich harmonies at the top of Act II in “It’s Beginning to Look a lot Like Christmas.” Callahan can be heard belting her incredible voice earlier in the production as well.

Maiolatesi is one of three ensemble members that should be singled out for impressive character work. Playing briefly the secretary to the irritably quirky store psychologist Mr. Sawyer (Will Emory), she is a ripe hoot with her accent and vivid facial expressions. Emory steals the scene entirely, however, when he stumbles into it as the nasally pinched and frightfully fussy store quack. Emory’s consistency with the character is remarkable; zany and obnoxious as the man we all hate for labeling Santa Claus insane, he really runs away with this scene and gives the audience a good deal to laugh at in the process. Rounding out the trio of ensemble members who catch your eye even when not singing is Judge Group (David Bosley-Reynolds.) There is something candid about Reynolds’ performance as the judge, an homage to the original movie actor that makes him seem fitting for the role and really makes you focus on him when he speaks.

Taking the title for show-stealer, however, is the ridiculously over-the-top flamboyant performance by Darren McDonnell as Mr. Shellhammer, personal assistant to Doris Walker. McDonnell is a hysterical hoot, particularly with his nervous disposition and he really throws his all into every moment of his character’s existence. Saucier than the cranberries on the Thanksgiving table and shining with the glaze of a freshly honeyed-ham, McDonnell emits many laughs during “The Plastic Alligator” number and every time he says the word “Gimbel.” His singing voice is strong and crisp, making for the perfect blend of comedy and talent. A remarkably funny performance, McDonnell takes the fruitcake role to new holiday heights.

It’s R. H. Macy (Lawrence B. Munsey) that you have to keep your eyes and ears on, however, as the man about town in this production. Munsey’s rich robust voice fills the theatre to capacity at the top of the show during “The Big Ca-Lown Balloons,” a holiday sparkle so thoroughly present that you can’t help but breathlessly anticipate the arrival of Santa Claus. While Munsey’s character starts off as gruff and bristly, a true salesman, his heart softens and practically leaps out of his chest during “That Man Over There.” Munsey’s hearty voice carries a tremendously impressive belt in this number, proving to the court his full support of Kris Kringle as Santa Claus. Between the interactive shenanigans with the DA Thomas Mara Sr. (Shawn Kettering) and engaging the rest of the courtroom to join him, Munsey lets Macy embrace the holiday spirit with radiant vigor.

Little Susan Walker (at this performance Sadie Herman) is the girl without Christmas faith. Herman is an exceptionally talented young performer with a glorious voice that blends well in all of her duets, especially when she parades around with her mother Doris in “Arm in Arm.” Herman is precocious and balances moments of youthful innocence with wisdom beyond her years. Reluctant at first to accept Fred Gaily as ‘Uncle Fred’ when she joins him in song for “My Wish” it becomes a tender and sweet duet that proves just how over the moon she is at the idea of a father, even if it is only for a day.

Fred Gaily (Jeffrey Shankle) brings the holiday feelings of happiness with him wherever he goes. Shankle has a superb voice for this role, filling the rich tenor range with his warm tone and energetic emotions. He plays the epitome of congenial, especially when enjoying the swings and teeter-totter with little Susan. Shankle isn’t all sugar and snow, however, and throws a little brass into his rendition of “Look Little Girl” with a boisterous sound that sends Doris (Heather Marie Beck) for a spin. His cheeky nature resurfaces when he patters through “She Hadda Go Back.” The chemistry that burbles between Shankle and Beck is at first slightly caustic, but as the show progresses it evolves into a tender, touching sentiment that fills you with good tidings of great joy just like a Hallmark card or fresh baked cookies from the oven.

Beck, as the frigidly harsh Doris Walker showcases a sensational range in her voice, hitting the lower end notes with sublime perfection. Despite her character’s bitter demeanor toward love, Beck’s voice is truly passionate and wistfully nostalgic for “You Don’t Know.” Beck’s character may have changed her tune by the end of the show but her voice never falters, even when she switches from melancholic to full of optimism for “Love, Come Take Me Again.” Her interactions across the board, regardless of whom they are with, are firm and set in the character she has constructed.

When Santa Claus comes to town, you’ll know he’s arrived. And Toby’s might actually have found the genuine article in Robert Biederman. It’s hard to say exactly what it is that makes him so genuine, perhaps the persistent twinkle in his eye, or maybe it’s the comfortable way he interacts with the children, but I’m convinced he’s Santa Claus. Biederman has gentle singing voice that is perfect for the Dutch duet with Henrika (at this performance Samantha Yakaitis) “Bugles.” He truly inspires the true meaning of Christmas and brings a sense of holiday enchantment with his performance. “Here’s Love” is his finest number, really filling the theatre with the sound of Christmas as he leads the ensemble to the show’s main message: ‘Tis the season to love one another.” Biederman gives a heartfelt performance and reignites the flame of belief in the minds and hearts of the young and those young at heart; the man truly is Santa Claus.

As you all know Santa can’t stay long past the holidays, and tickets are selling fast! Be sure to get yours before there aren’t any more so that you can witness this Christmas miracle. Toby’s Miracle on 34th Street is a wonderful event for the entire family, a night of memories that will last for many Christmases to come.

Running Time: 2 hours and 30 minutes, with one intermission.